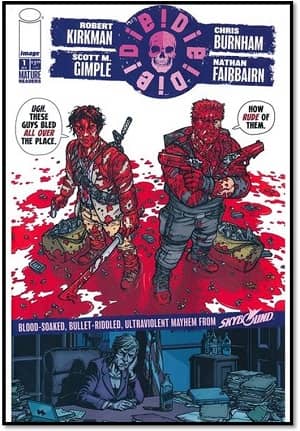 This week Image/Skybound Entertainment broke with new release tradition and dropped the first issue of an all-new series without preamble, by comics titans Robert Kirkman (The Walking Dead, Outcast by Kirkman & Azaceta, Oblivion Song), Scott M. Gimple (Punisher: Nightmare, writer and producer for The Walking Dead TV adaptation on AMC), and Chris Burnham (Batman Incorporated, Nameless, Nixon’s Pals), with colors by Nathan Fairbairn who gets to use whichever one he wants as long as it’s red. The first issue of the series entitled DIE!DIE!DIE! went on sale Wednesday.

Kirkman himself made the rather gleeful announcement circulated Tuesday, which is rather last minute as these go, and entirely on purpose:

That’s right, in stores TOMORROW! We want to make going to a comic shop exciting again — a place for discovery! The internet has drained all surprise and anticipation from comics. Everyone hears about exciting new projects and then has to wait months or years for it to be in their hands… and half the time at the end of that buildup, the stories get spoiled in some lame attempt at getting wider media attention. So, surprise! Here’s a new monthly series. How cool is that?! This is literally the only way I can be like Beyoncé.

I spend most of my time working in TV, the big Walking Dead programs keep me plenty busy, but I’ve had a burning passion for comics since I was nine. I used to go to panels to see Robert Kirkman talk. And now he’s writing quotes in a press release as me that I can read over and tweak!

Yes gentlemen – the euphoria is real and we feel it too.

DIE!DIE!DIE! promises to be a blood-soaked, no holds barred, action-packed, irreverent story which Kirkman promises fans “won’t be able to rip their eyes from.”

We live in an evil world where evil people do evil stuff all the time and DIE!DIE!DIE! lifts the veil on a secret cabal within the United States government that influences world matters through targeted assassinations. The world around us is manipulated right under our noses, mostly for the better… but sometimes for individual gain, and sometimes for the fun of it. 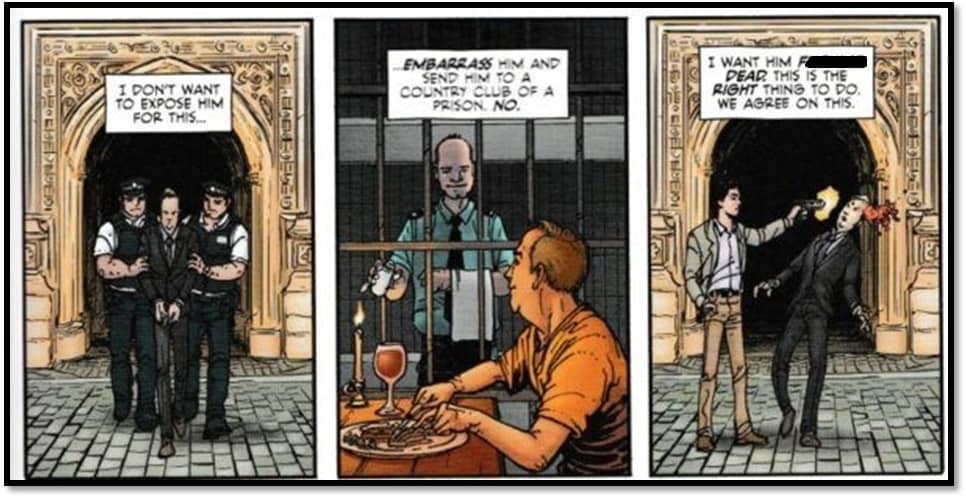 “We cooked up all sorts of great action sequences and horrific gross-out gags for this book,” said Burnham. “Maybe we should have called it Puke!Puke!Puke!”

There’s no doubt this series has an outstanding pedigree and a timely storyline, but I worry a little that comics are going the way of games and movies when it comes to shock value over storyline (Puke!Puke!Puke! really??) but we’ll just have to wait and see.

Have a question or comment on this? I’d love to hear it so post it here so we can all discuss or send an email to sue@blackgate.com.

Heh – I hope it has a good story – even “Style over Substance” can be if done right. There’s a niche where people want action flicks in comics, etc.

However, as far as pushing any boundaries… Doubt it.

Depending on where you look there’s a lot of blood/violence etc. Some of it was a big F— You! to the now dead and buried Comics Code.

Way way back there was this cool comic book, “Faust” aka “Love of the Damned” – a modern interpretation of the Faust story combined with superhero stuff, inspired more by Goethe than Marlowe. Best quote – “I make such a MESS when I play…God…”

A more recent one was “Black Summer” which started with the head of a superhero team walking into the press room covered in blood. He announced he’d executed the President, this wasn’t a coup but an attempt to restore Democracy… (Don’tcha love “What if superheroes in RL”?) It pointed out brilliantly there’s really no press anymore – just a propaganda outlet pretending to be the press coz the “Reporters” the ones not losing their meals or stomping each other trying to get out of the room or fainting were emotional wrecks – on TV one of them “How the F— am I supposed to tell if he’s serious!? I’m just a F—ing newsREADER…”

There’s always going to be something like this comic is hyping itself to be. Once in a while we need a story like that. My fav was a TMNT with the turtles and Casey Jones turning gun nut vigilante.

“John Woo, eat your heart out!” – maybe we should name this trope that to avoid another “-Punk” neologism?

G2 – Thanks for the insights and sharing the other examples. Not sure I will ever be a fan of these any more than I am a fan of blood-bath horror movies. It does not seem to take a lot of talent to throw buckets of blood in a movie. Of course, in the case of comics I have to say the artwork definitely takes skills.