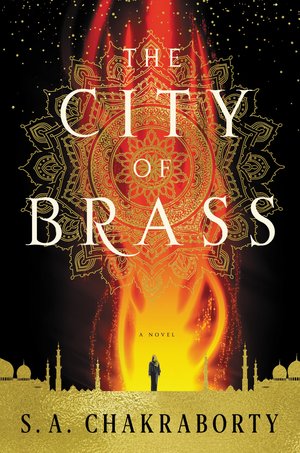 There are creatures and elements of the supernatural that appear in popular culture from time to time, earning a reaction of “ooh, look, it’s a ___________!” (At least from me; I don’t know about other people.) When I read the premise for City of Brass and saw that it focused on djinn and demons, I was intrigued right away – I mean, genies are cool.

The best part about Chakraborty’s take on djinn, ifrit and other associated beings is that they aren’t sensationalized or exoticized like we see on shows like Supernatural or Buffy. Between her personal background, a significant writing talent and what I can only imagine was a lot of research, Chakraborty creates a world that’s nuanced and detailed. It has exactly the vivid freshness we continue to need in the fantasy genre, as a balance for the variations on the same Eurocentric worldviews that are still widely common. When I teach my students about promoting diversity in speculative fiction, City of Brass will be one of the examples I hold up.

But the novel is much more than its world – at the end of the day, my interest is always characters. Our two main protagonists, Cairo street urchin Nahri and immortal warrior Dara, are great counterparts; they’re equally passionate and protective, but in different ways, and both are seeking to find their place in the world. I’ll admit that I groaned a bit at the first signs of romance between them (it begins early enough in the novel that I’m not really spoiling anything) but the way that this romance develops and progresses later doesn’t follow a typical narrative course, and so it won me over. Meanwhile, protagonist Alizayd’s journey is just as compelling, as he navigates loyalty to his family and his belief in what’s right, amid the cultural politics of the daeva.

That said, there’s so much built into City of Brass that I’d periodically lose track of certain details. For example, it’s mentioned early that Nahri aspires to escape Cairo and attend medical school; about a third of the novel later, when she’s working as a healer under very different circumstances and laments that old aspiration, I had to remind myself “Right, this is what she always wanted” because of how much had happened in between.

There are also key elements to the plot, mostly related to the main antagonists, that I thought would come back up but never did. In the industry, a “standalone with series potential” is popular for agents and publishers, but the “standalone” piece seem to be lacking a little here.

These are nitpicky things, though, since overall City of Brass is excellent. It’s rare that I find a fantasy novel that’s so vividly detailed but doesn’t bore me with description – probably because its world is so different than what other authors have created. If you’re hurting for something fresh in fantasy, scope this one out.

An Ottawa teacher by day, Brandon has been published in Daily Science Fiction, On Spec, PULP Literature, and elsewhere. Check out his short story “Rainclouds,” concerning an inhospitable colony world where rain is scarce, on Electric Athenaeum. Learn more at brandoncrilly.wordpress.com or on Twitter: @B_Crilly

I also really enjoyed this book. I found the characters to be very nuanced and strong. While there were plot threads left dangling, its because the book isnt a standalone – its the first of a trilogy and I believe the second one comes out next year.