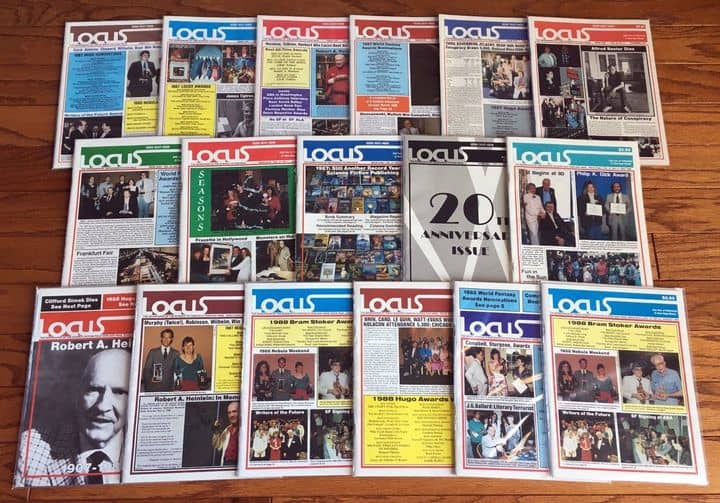 Over at Tor.com, Paul Weimer (who comments occasionally at Black Gate and elsewhere as PrinceJvstin) has written a fine tribute to one of my favorite magazines — Locus, the news magazine of the science fiction and fantasy field. He captures exactly what the magazine has meant to readers over the years, especially in the 80s and 90s when it was the trusted news source that tied together the entire genre.

In 1968, the legendary anthologist and editor Charles N. Brown created a one-sheet fanzine about news of the science fiction field. Brown’s intent was to use it to help the Boston Science Fiction group win its Worldcon bid. Brown enjoyed the experience so much that he continued the magazine through Noreascon I, the 29th Worldcon held in Boston in 1971 (where Locus won its first Hugo award). Brown continued to be the steward of Locus until his death in 2009. In that run, Locus won thirty Hugo awards, and for good reason…

Before the internet transformed how we get news and information, Locus, under Brown’s stewardship, and the assemblage of his team of columnists, grew and expanded its reach year after year until it became what I call the semiprozine of record. Locus became the go-to place for SFF news and information, backed up with a strong stable of reviews and interviews. Every issue of Locus was a window into the ever shifting and changing world of SFF.

The magazine was so important that, when we launched Black Gate in fall of 2000 with a very limited advertising budget, there was never any question about where we should spend it — on a full page ad in Locus. It paid us back handsomely.

The magazine has changed its look over the decades, and in recent years has graduated to glossy full-color interiors and greatly improved the cover design. But despite all the modern competition from online blogs, podcasts, and social media, it remains the most important single source for news, reviews and opinion of interest to SF fans. 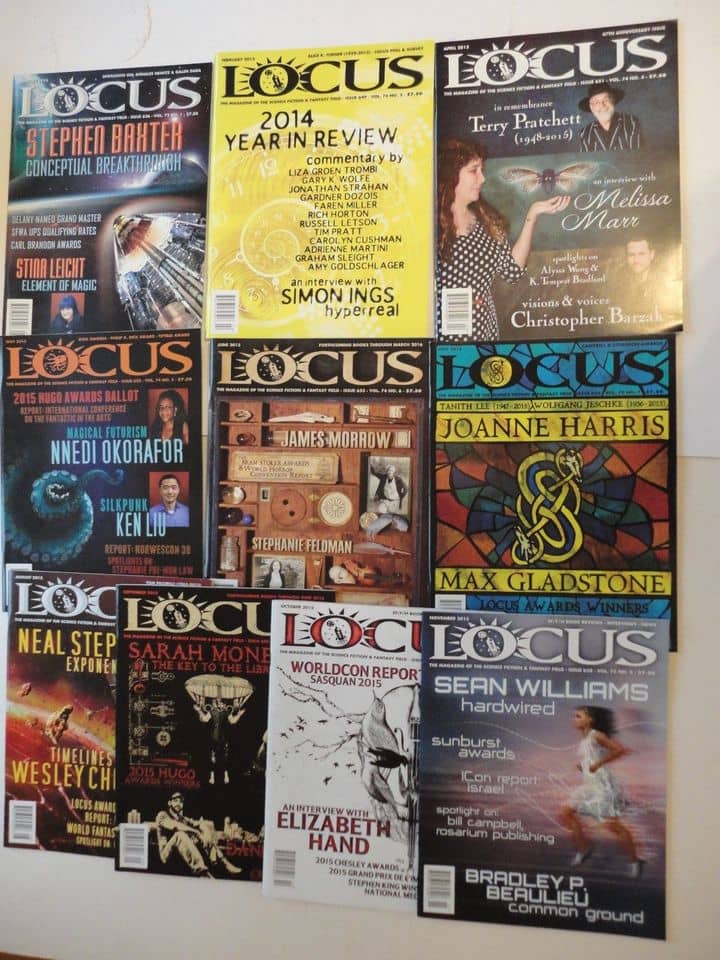 Here’s Paul on just what wonders you find inside each issue.

Within its pages, with a couple of decades under its belt, I discovered just what a semiprozine of record could do and mean. Every month I would eagerly look at the news feature first: Who had sold rights to a new book? Who had gotten married? Who (sadly) had passed away? I devoured the glossy, photo-laden columns recounting various conventions, from Worldcons to local SFF scenes. It was in these pages that I first became cognizant of the idea that there were thriving SFF communities not only in the US and in the UK, but really, across the entire world. The bestsellers list in the back of the issue gave me insight as to what people were excited about, pointers toward books that I might consider trying myself.

It was also in the pages of Locus that I really started to understand and get a sense of science fiction and fantasy awards and their role in the community. Sure, I had seen “Hugo Award Winner!” emblazoned on books in the bookstore, but it was in Locus that I read lists of nominees for the Hugo, the Nebula, and of course Locus’ own award. For years, I discovered authors by seeing their names on Hugo and Nebula nomination lists: Kate Elliott, Martha Wells, Lois McMaster Bujold, Walter Jon Williams, and many others. I looked forward to the magazine’s photos of the award nominees — to getting a glimpse of who these authors really were.

Read the complete article at Tor.com.

See all our previous coverage of Locus here, and all our magazine coverage here.

A fine publication. I subscribed at one point, but later became a buy-if-see at the “newsstand”, which was the magazine rack at one bookstore after another that closed. I admit I rarely see it any more.

As a college English prof, who sometimes (4 times in 25 years) got to teach a science fiction course, I was able to use faculty development money to purchase materials related to my courses. In the last full year before I retired, I was able to sign up for three full years of LOCUS. I got my last issue on that subscription today — but I signed on for 2 more years a couple weeks ago. I won’t pretend to read every single word of every page; some of those lengthy columns of who’s publishing what and when are drier than sitting through a faculty meeting. But I love supporting the field, buying books & magazines & attending conventions & visiting online sites like these and talking up a positive line as often as I can. Science fiction has been awfully good to me over the last 55 or so years, and even if I don’t read the entire issue of every LOCUS cover to cover, I enjoy having it to look at, check what’s coming out new, see who’s been where and done what (LOVE the pictures!) and who’s left us, often all too soon. A while back the question was posed, “Are we fans of a dying art form?” I’d bet that same question has been posed every generation or so, yet there’s always been a younger generation that not only gets caught up in the old stuff, but grows up to create NEW stuff to help capture yet the next generation. We aren’t dying; we’re changing, and adapting, and growing, and we ain’t never goin’ away. Charlie Brown is gone, but LOCUS continues. Ursula’s gone, but someone will carry on where she left off. When I go, I’ll be leaving behind an extensive collection that I hope my daughters and, perhaps someday, their kids will enjoy. The future’s just around the corner, and publications like LOCUS help keep us apprised of what will be out there that can better prepare us when we meet that future head-on.

> A fine publication. I subscribed at one point, but later became a buy-if-see at the “newsstand”

While I was unemployed I briefly let me subscription to Locus lapse, reasoning that I rarely even opened issues these days, and could pick them up at the bookstore if they looked especially interesting.

Of course, I ended up buying virtually every issue I picked up. I’d flip through them, find something cool EVERY DAMN TIME, and ended up spending a lot more money buying issues at the newstand.

I guess it worked out though… I started reading Locus regularly again, and that’s a good thing.

The other reason Locus was an important discovery for me was not just the book reviews and the growth of my TBR pile to unsustainable proportions, but the glimpses it gave me into the business and the personal side of authors’ lives, especially back in those pre-internet days.

> A while back the question was posed, “Are we fans of a dying art form?” I’d bet that same question has been
> posed every generation or so, yet there’s always been a younger generation that not only gets caught up in
> the old stuff, but grows up to create NEW stuff to help capture yet the next generation. We aren’t dying;
> we’re changing, and adapting, and growing, and we ain’t never goin’ away.

The article you mentioned (“Are We Fans of a Dying Art Form? James Wallace Harris on Old Science Fiction Stories,” one of our most-read blog posts last month) was mostly talking about short stories, not SF in general. But I completely agree with your point. There’s really exciting new work being done today, and a talented new generation of writers and readers. SF is thriving.

And here’s the article I mention above:

> The other reason Locus was an important discovery for me was… the glimpses it gave me into
> the business and the personal side of authors’ lives, especially back in those pre-internet days.

Yeah, very true. I wouldn’t say it turned SF writers into celebrities… except maybe it did, for readers such as myself who were keenly interested in all these writers and artists.

Yeah, not celebrities, but the first time I was getting a sense that books were actually written by real people (and publishers also employed lots of real people).

Yeah, I went a little off-topic, John, but I’d just read Liza Groen Trombi’s last-page comments in the newest LOCUS in which she lamented increasing costs vs. reduced advertising income, and the need to move due to a rather inflated rental adjustment. Nobody else does what LOCUS does, and if they can’t keep up with rising production costs, who’d replace them? They’d be sorely missed. I’m a widowered senior retiree, getting by on Social Security, but I’m planning on supplementing my subscription renewal with a donation on Patreon. For me, it’s well worth it.