There are a lot of animals in Fantasy. Plenty of horses, for example, and similar four-legged transportation. Then there are magical and mythological animals of all kinds – and some that are just plain madeupical.

What there isn’t much of in either SF or Fantasy fiction is pets. I find this significant – not the least because, next to their families, there’s probably nothing – or no one – more important to people than their pets. So are pets just too “real life” for SF and Fantasy fiction?

Now I’m not talking about works where one of the main characters is an animal, so, not Temeraire in Naomi Kovik’s novels. Not Ratty or Mole, or even Mr. Toad in Wind in the Willows.  I’m particularly not talking about cats who solve crimes – though it’s not at all unusual for protagonists of a cozy mystery to have either a dog or a cat as a pet. In fact, for a cozy, the presence of one or both is practically a requirement – check the cover art. One of the interesting things about dogs in mystery novels is that somewhere, in between all the sleuthing, the dog still has to be walked. You can’t get more real life than that.

Of course pets aren’t limited to cozy mysteries. Robert B. Parker’s Spenser has a dog named pearl. Robert Crais’ Elvis Cole has a mean old tom cat named . . . well, as far as I can make out, he’s named “cat.” Kinky Freedman also has a cat. Whenever he goes out Kinky leaves the cat in charge, telling him to watch the place. Probably the most famous pet of all, Asta, belongs to Nick and Nora Charles from The Thin Man series. 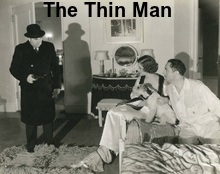 Maybe it’s a whodunit thing? Even in Fantasy the wizard/detective Harry Dresden has a cat named Mister. Sometimes Harry seems to have forgotten about him, but he’s there. I haven’t read all the Dresden novels, so I don’t know if Mister takes on a more significant role later in the series. On the other hand, Austen, in Tanya Huff’s Keeper Chronicles only looks like a pet to other people. In reality he’s definitely a major character with a real role to play.

I can only think of one pet in SF, Petronius the Arbiter, better known as Pete, in Robert Heinlein’s Door into Summer. Pete doesn’t play a significant role in the plot, but he’s certainly significant to the protagonist, and unlike Austen, he’s strictly a pet.

Wait a minute. Wasn’t there a beagle in Star Trek: Enterprise?

In the novels – I have not seen the video series – Longmire has a dog named “Dog” that in some cases (oops) plays an important role.

what about all the robotic pets inPhilip K Dick’s “Do Androids Dream of Electric Sheep” ?

In Prachett’s Discworld series, Nanny Ogg’s cat, Greebo started out as a pet before becoming a character.

In Star Trek NG, Data had a cat, Spot.

In Back to the Future, Doc Brown had a dog, Einstein. (before that he had a dog named Copernicus)

The watchwhers and fire lizards in McCaffery’s Dragon series.

—
Maybe they just tend to fade into the background in SF/Fantasy.

What about the Starks’ dirwolves?

I love that series for many things, but one is the Stark direwolves, who straddle that line between pet and partner.

Also it always reminded me of being a kid and wishing I could be like GI Joe’s Snake-eyes, who had a pet wolf named Timber…