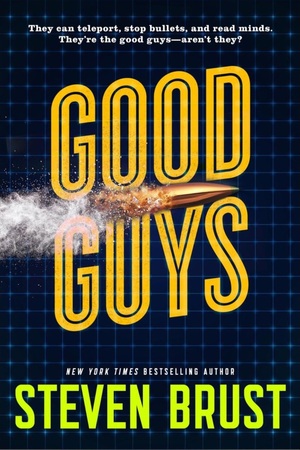 The first book I ever read by Steven Brust was Jhereg, the opening volume in the long-running (15-book!) and best-selling Vlad Taltos series that has come to define his career. In 2013 he collaborated with Skyler White to launch a contemporary fantasy series, The Incrementalists, but before that his last standalone novel was Agyar in 1993.

So I was surprised and pleased to receive a review copy of Good Guys this week, which the accompanying press materials describe as a “snarky, irreverent tale of secret magic in the modern world, the first solo standalone novel in two decades from Steven Brust.” Here’s the description.

Donovan was shot by a cop. For jaywalking, supposedly. Actually, for arguing with a cop while black. Four of the nine shots were lethal ― or would have been, if their target had been anybody else. The Foundation picked him up, brought him back, and trained him further. “Lethal” turns out to be a relative term when magic is involved.

When Marci was fifteen, she levitated a paperweight and threw it at a guy she didn’t like. The Foundation scooped her up for training too.

“Hippie chick” Susan got well into her Foundation training before they told her about the magic, but she’s as powerful as Donovan and Marci now.

They can teleport themselves thousands of miles, conjure shields that will stop bullets, and read information from the remnants of spells cast by others days before.

They all work for the secretive Foundation… for minimum wage.

Which is okay, because the Foundation are the good guys. Aren’t they?

Good Guys will be published by Tor Books on March 6, 2018. It is 316 pages, priced at $25.99 in hardcover and $12.99 for the digital edition. Read the first two chapters here, and our recent coverage of Steven Brust here.