For the last few years the major streaming players — Netflix, HBO, Amazon, Hulu, and others — have spent untold millions searching for the next Game of Thrones. A tale of dark magics, black-hearted evil, kings and princes, palace intrigue, war, treachery, and sex. I could have saved them a lot of time if they’d just asked me. I would have recommended they film John M. Ford’s The Dragon Waiting.

The Dragon Waiting: A Masque of History was published in 1983. It’s a sprawling alternate history that combines Richard III, Edward IV, the Princes in the Tower, the Medicis, and vampires. Edward IV sits on the throne of England, but his kingdom is threatened by an expansionist Byzantine Empire. The Vampire Duke Sforza is massing a dark army against Florence, and Byzantium is on the march. High in the Alps four people come together: the exiled heir to the Byzantine throne, a beautiful physician forced to flee Florence, a Welsh wizard, and a German vampire. Together they wage a secret campaign against the entire Byzantine Empire, to secure the English throne for Richard, Duke of Gloucester, the future Richard III.

The Dragon Waiting was Ford’s third novel, following Web of Angels (1980) and The Princes of the Air (1982). Roger Zelazny called it “A Thunderclap of a book, a thing of blood and magic,” and Gene Wolfe called it “The best mingling of history and historical magic that I have ever seen.” It won the 1984 World Fantasy Award for Best Novel. 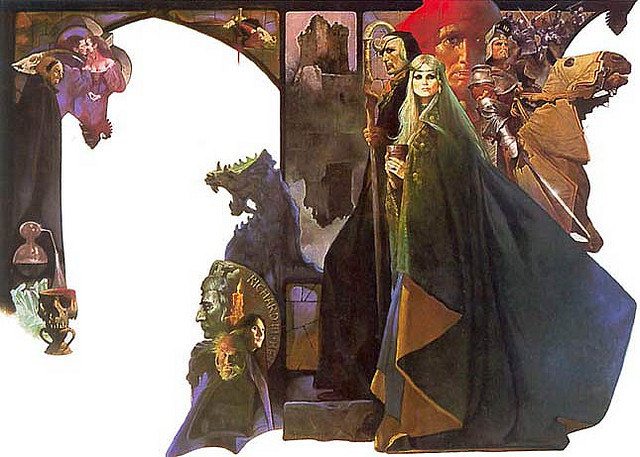 The novel was first published in hardcover in 1983 by David Hartwell’s Timescape imprint at Pocket Books, with a cover by Howard Koslow. But the one you want is the 1985 Avon paperback, with the gorgeous wraparound Sanjulian cover. Everyone says “they don’t do it like this any more,” and in this case it’s very true — they don’t make covers like this any more. It’s a magnificent piece of art by one of the greatest cover artists our genre has seen.

I purchased a copy last month as part of a small paperback collection of 25 books I bought online for $18.

I really do love that cover. And someday I PROMISE I’ll read the hardcover that’s been sitting on my shelf for the last … mumble, mumble …

Back when this book was still of recent vintage, I was working in a huge bookstore and put it, and Crom knows how many other books, on my employee hold shelf. It sat there for so long, accompanied by a constantly growing stack of other intended purchases, that I finally felt compelled to purge most of my holds, buying some and returning the rest to the store shelves.
So it looked like I was going to buy this book for months.
But I never did.
I bought literally hundreds of books there. Hundreds.
But I didn’t buy enough.

One presumes it’s out of print because of the apparent hostility of Ford’s family to he and his work. Ford died intestate and thus ownership of his copyright went to his estranged family, and they seem to have decided to bury it. (Or so I have heard.) Reminiscent of the C. L. Moore case.

Not sure if GAME OF THRONES type money would be enough to make them budge!

I don’t know how it would work, but it seems like a revision to copyright law for cases of this nature would be appropriate.

> I bought literally hundreds of books there. Hundreds.
> But I didn’t buy enough.

I know precisely how you feel. What’s that old book collector adage? “You always regret the book you didn’t buy.” We’ve all been there.

That’s the great thing about paperbacks. An expensive vintage paperback is one that costs as much as a brand new paperback. There are copies of THE DRAGON WAITING in great condition on eBay with a buy-it-now price of 99 cents.

I assume we’re living in the Golden Age of paperback collecting, when almost everything is ridiculously cheap (as pulps were in the 50s).

Will paperbacks explode in price 30 years from now, the way comics and pulps did? Who knows? But I’m hoarding thousands of them in my basement, just in case.

Ah, I forgot all about that. Tragic, and a good object lesson for living writers.

I assume no one will ever offer GAME OF THRONES money for THE DRAGON WAITING. Without living fans (or a spectacular agent), 30-year old paperbacks vanish. No one is talking about Ford today. A pity.

Correction: The unread Ford hardcover on my shelf is The Scholars of Night.

My unread copy of Dragon Waiting is an Avon paperback with a much less impressive cover:

I’ve never even seen that cover! How much you want for it?? 🙂

Hmmm … Once I have the Sanjulian cover, we can talk … 😉

Can’t-Wait Wednesday: The Dragon Waiting by John M. Ford | Every Day Should Be Tuesday

[…] all started when I read this Black Gate article.  How can you pass on a cover like […]