When Jim Baen left Ace to found Baen Books in 1983, he implemented a publishing strategy that served him well for decades: buying up the back catalog of popular authors and re-issuing them in visually similar covers that could be identified at a glance on crowded bookstore shelves. It was a strategy he learned while working under Tom Doherty at Ace Books from 1977-1980 (and refined under Doherty at Tor Book from 1980 – 1983).

While at Ace, Baen’s genius was to marry popular authors that had substantial back catalogs — like Andre Norton, Gordon R. Dickson, and Keith Laumer — with brilliant new cover artists. For me the exemplar of this strategy was Poul Anderson’s late 70s Ace editions, given new life by the striking world of a rising new artist named Michael Whelan.

When Richard Powers single-handedly remade science fiction art in the late 60s, it wasn’t long before bookshelves were overrun with abstract art. SF paperbacks, once criticized for pulp-era sameness and tired spaceship motifs, now suffered from a very different but no less stifling form of sameness. Plenty of writers were victims of the “Powers revolution” in SF art in the 1960s, but I think Poul Anderson was more victimized than most. His colorful tales of science fiction adventure on far planets were sold to the public under abstract covers that told them nothing about what they were getting.

[Click the images for vaster and more mind-boggling versions.]

Richard Powers was not single-handedly responsible for all of this, of course. Except… well yeah, he was.

Poul Anderson paperbacks in the late 1960s. Covers by Powers

Now, I don’t want to appear as if I’m critiquing Richard Powers. He arrived on the scene as SF art was stagnating, and his gorgeous artwork triggered a much-needed revitalization of the entire genre. I can’t even critique Art Directors at publishing houses all that much… for nearly half a decade, the key to selling a science fiction paperback to the public was to slap a Powers cover on it. For many years he was the most in-demand artist in the field, and readers couldn’t get enough.

Until, of course, they could.

Enter Ace Books and Jim Baen, who broke away from what had become the new established wisdom, and packaged SF adventure tales with artists that understood adventure. Here’s a sample of Anderson’s Ace covers, all by Michael Whelan. 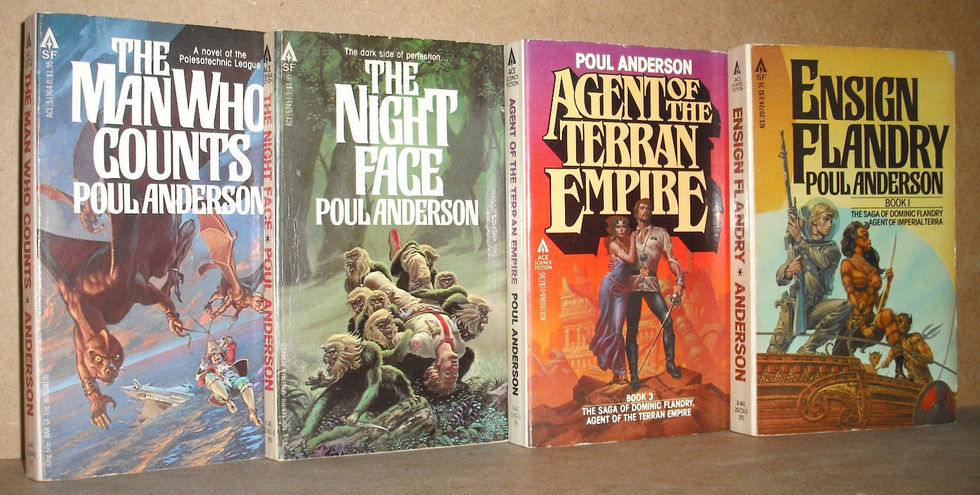 Poul Anderson paperbacks in the 1970s. Covers by Whelan

It was a brilliant move, and it introduced Poul Anderson (and Laumer, and Norton, and Dickson and many others) to an entirely new generation.

Certainly Anderson and Whelan deserve a much longer and more detailed survey of their fruitful Ace partnership. But today I want to focus on one particular title in the extensive set, The Long Way Home, originally serialized in four parts in Astounding Science Fiction in 1955, starting with the April issue. 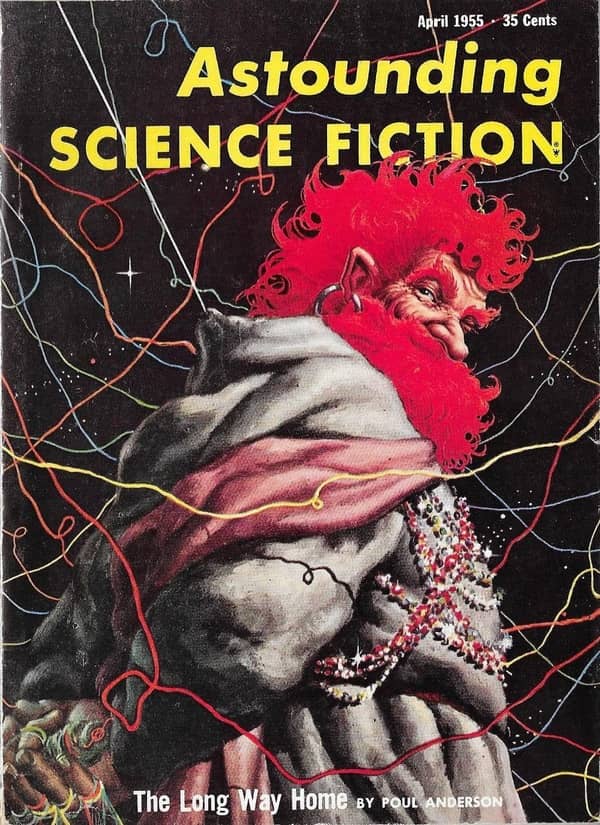 Here’s the complete set, for the magazine collectors in the crowd.

The Long Way Home first saw paperback later that same year as part of Don Wollheim’s Ace Double line, #D-110, under the title No World of Their Own, paired with Isaac Asimov’s The 1,000 Year Plan (better known these days, of course, as Foundation). 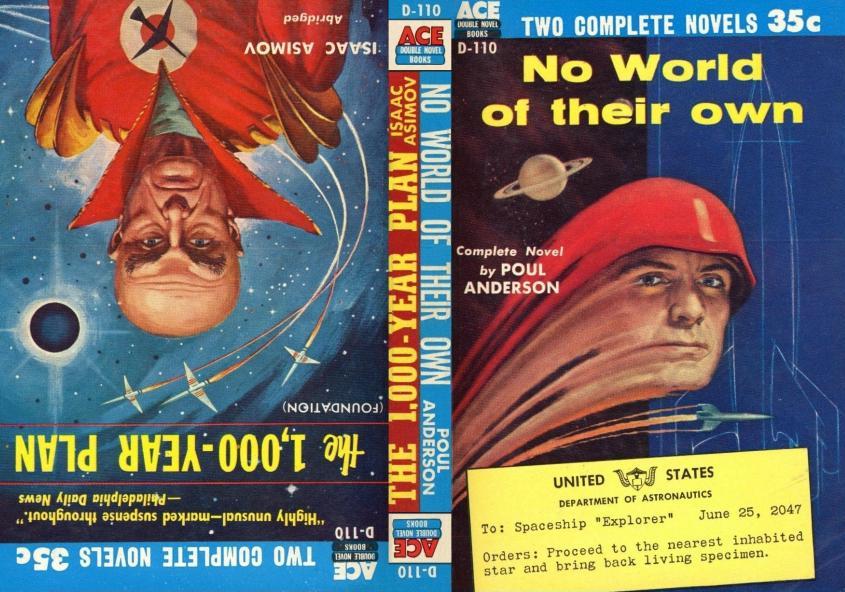 It was out of print for two decades before finally being reprinted in the UK in 1975 by Panther, who restored its original title. 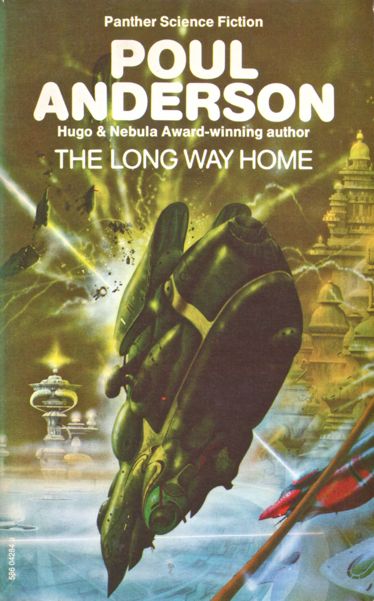 The Long Way Home is a standalone novel, not part of Anderson’s famous Psychotechnic League future history, Dominic Flandry, or Technic History novels, and I think it makes a fine intro to his work.

I’ve only read Poul Anderson’s fantasy–and love, love, loved it! I just recently finished The Broken Sword and couldn’t believe I’d never really had heard of it. I definitely want to read more of him. Thanks for the post.

All right Mr. Parker! A shout-out to Tau Zero is as uncommon as it is richly deserved. Unforgettable novel.

Open Road Media has been doing good work. I have a very, very long list of other authors I keep hoping they’ll pick up at some point. (Louise Cooper, e.g.)

I’ve got The Broken Sword, The High Crusade, and a collection of short stories on my shelf. I’ve never touched any of them. The more i hear about them the more I realize i need to pick them up.

Do we really admire the covers for Ensign Flandry and Agent of the Terran Empire? Surely the 1960s abstracts would look better on a contemporary bookshelf?

> I just recently finished The Broken Sword and couldn’t believe I’d never really had heard of it.

A few folks have covered THE BROKEN SWORD at Black Gate before, but that doesn’t mean I wouldn’t be interested in your thoughts. If you’d like to do a review, let me know!

> All right Mr. Parker! A shout-out to Tau Zero is as uncommon as it is richly deserved. Unforgettable novel.

I’ve never read TAO ZERO… but when I was 12 years old, that’s how I discovered my neighbor next door was also into science fiction, when I found him reading TAO ZERO on his doorstep. We’ve been friends ever since!

I read The Long Way Home in Astounding in the issues you show, as I had a subscription at the time. I wish I still have all those issues (they were stolen by a teen who sold them for cigarette money). January 1950 through December 1972, gone.

But back to Anderson. I surely love the Whalen covers better then Powers, but always wished they could have gotten Kelly Freas to do them. I guess for some reason his work wasn’t available (contract issues?). This post makes me want to pull out some Anderson as soon as I finish SEMIOSIS by Sue Burke. So far I’m enjoying it.

> I have a very, very long list of other authors I keep hoping they’ll pick up at some point. (Louise Cooper, e.g.)

I was thrilled to see them do a fine series of volumes collecting Simak’s short fiction. I wasn’t aware they had secured the rights to others. What have I missed?

> The more i hear about them the more I realize i need to pick them up.

If it makes you feel any better, THE HIGH CRUSADE has been on my TBR pile for very nearly 40 years.

I juts bought the first one! I hope to settle in with it this weekend.

I saw the third (and final?) volume was just announced. It arrives in July. 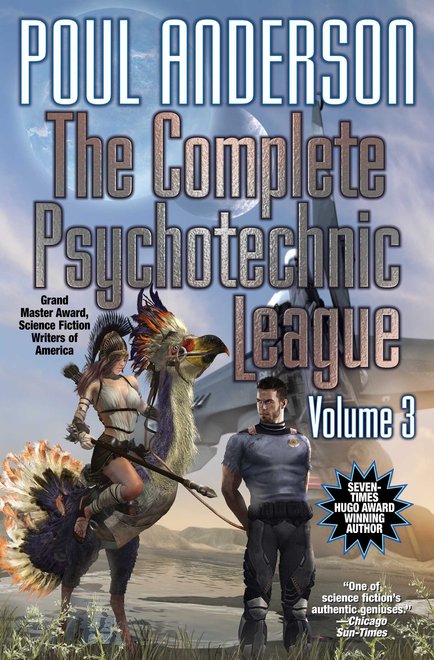 > Do we really admire the covers for Ensign Flandry and Agent of the Terran Empire? Surely the 1960s abstracts would look better on a contemporary bookshelf?

Obviously your mileage may vary, as those two in particular are a little more problematic in 2018. However, I stand by my endorsement, and contend that they are much superior to the current Baen covers, which I find grossly sexist.

You could argue, of course, that the covers accurately reflect the contents, and are thus doing a service to the reader.

Oh, and lots of John Brunner!

> Oh, and lots of John Brunner!

John Brunner, really? I had no idea! *scurries off to Amazon*

Richard Powers was actually more late 50s/early 60s. It was Paul Lehr whose abstact art dominated the paperback racks during the late 60s and early 70s.

You may be right. But I’m not sure Poul Anderson ever had a Paul Lehr cover? Do you know of any examples?