Usually I use a Vintage Treasure post to celebrate a book I enjoyed decades ago, or a tough-to-find artifact that I’ve finally tracked down. But not always. Sometimes they’re just surprises.

The 1985 Tor paperback The Exile Waiting is a fine example. It showed up in a small collection of vintage paperbacks I bought on eBay last week for $5.95. Until then, I had no idea it even existed.

This is a surprise because Vonda N. McIntyre was one of my favorite SF writers of the 70s, and I thought I was paying more attention. Her marvelous novelette “Of Mist, and Grass, and Sand” won the 1973 Nebula Award, and the novel it formed a part of, Dreamsnake (1978), won both the Hugo and Nebula Awards. And in 1997 her novel The Moon and the Sun won the Nebula, beating George R. R. Martin’s A Game of Thrones. That’s not something you see every day.

Now, I wasn’t completely ignorant of this book. The Exile Waiting was McIntyre’s first novel, published by the Science Fiction Book Club in 1975 and reprinted in paperback by Fawcett Gold Medal a year later with a cover by Larry Kresek.

I have a copy of that one. But I wasn’t aware of the Tor edition, which is a revised and expanded version of the 1976 novel. My Fawcett paperback is 224 pages; the Tor edition is 248. That’s a significant expansion, and well worth tracking down. 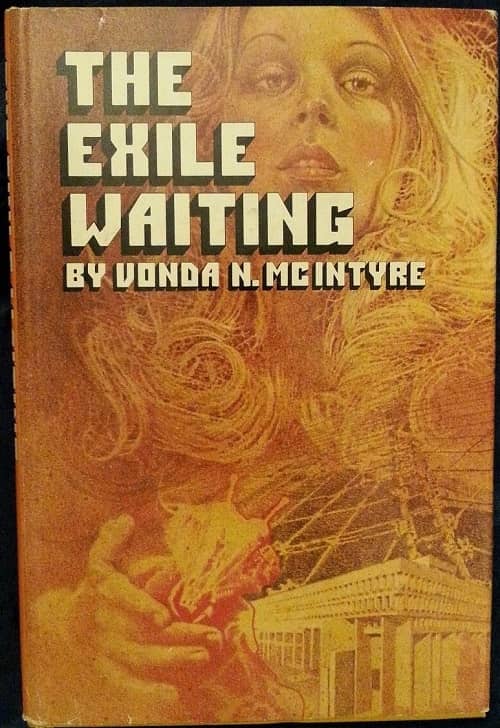 There was another reason I was eager to get my hands on the Tor paperback, although I admit it’s a bit idiosyncratic. The back of the Fawcett paperback is covered with exuberant blurbs by Joanna Russ, Roger Zelazny, and Damon Knight, but it doesn’t actually tell you anything about the book. I’ve had The Exile Waiting in my collection for two decades, and I still have no idea what it’s about.

I have a lot of unread books in my library, which means there’s plenty of titles vying for my attention. I find it challenging to work up enthusiasm for a novel when I don’t know anything about it. So when I received the Tor edition in the mail, I eagerly turned it over to read the description on the back.

Well, you know what happened. The Tor edition may be revised and expanded, but the back cover sure isn’t. It’s mostly just pared down versions of the same blurbs as the Fawcett edition, with some additional hyperbole about a famous first novel and a definitive edition.

That was disappointing. I’d already decided I wanted to feature the book in a Vintage Treasures post, but I didn’t want to do that and leave my faithful readers hanging, as ill-informed about this book as I’d been for two decades.

Fortunately, the internet is full of resources. I managed to track down the pair of images below, which capture the inside flap copy of the 1975 Science Fiction Book Club edition, in all its verbose glory. Feast your eyes.

The Exile Waiting was published by Tor Books in December 1985. It is 248 pages, priced at $2.95 in paperback. The cover is by Ron Walotsky. This was the last US edition, and to my knowledge there is no digital edition.

I liked THE EXILE WAITING a lot, when I read it in the original Fawcett edition. More than DREAMSNAKE, for sure.

I didn’t know about the Tor edition, nor that it had been expanded.

The title is taken from a poem by Ursula Le Guin, by the way.

> The title is taken from a poem by Ursula Le Guin, by the way.

I didn’t know that! I’ll have to track it down.