Just a little to report from this past month’s excursion into the realm of short heroic fantasy. First, there’s the best issue in some time of Swords and Sorcery Magazine. Second, issue #14 of Grimdark Magazine. While the latter is loaded with good non-fiction articles, there’s only a single, albeit 15,000-word-long, story.

Swords and Sorcery Magazine rarely falls below good, but less often rises to great. I suspect it’s the nature of a magazine that only is able to pay $10 a story. Nonetheless, I found myself not only enjoying issue #72 but, despite not being surprised by anything in them, absolutely loving this month’s stories.

With the first, “Godsteel,” by Michael Meyerhofer, it came down completely to his characters’ voices and relationships. Three archers in the army of the Godprince, stationed in the siege lines surrounding the city of Haltan, are being ground down day after day. The ongoing possibility of a pointless death during an endless blockade brings the trio to a fateful decision that will affect the outcome of the battle and their futures.

During the soldiers’ introductions in the first paragraphs I became wary. While the senior one is named Mennaus, the others were called Tongue, because he lacks one, and Brain, because he hasn’t much of one. I’m immediately leery of any story where everyone has a cutesy nickname based on some trait, a trait which is also usually his singular characteristic. I was relieved to see that wasn’t the case in Meyerhofer’s story.

I’m more than a little bored with the unending string of military fantasy in grubby, dirty settings, with armies of cynical soldiers, directed by callous generals. Far too often, these elements are presented as if they’re enough to give the story some sort of depth. Meyerhofer escapes that trap despite including all those things by making his characters more believable, more alive.

Aside from the magical element referred to in the title there’s not much of the fantastic, but it’s enough to hang the whole story on. “Godsteel” is excellent, and I look forward to tracking down more by Meyerhofer.

“Journeys: A Ghost Story” by Dorothy Winsor gives away its secret in the title, but that in no way lessens its impact. The narrator, the nameless son of a man we know only as Da, is accompanying his father on a quest for revenge on the forces that brought war against his homeland and people. There’s just enough backstory to explain why things unfold they way they do, but not too much to clog a well-paced story.

Da and son are introduced spying out the comings and goings in a gated town. Of interest to Da is the arrival of men from Riverton, the realm that attacked his homeland. Despite Riverton having lost the war, and no matter that his son warns of some vague danger indicated by the increasing presence of mysterious paw prints, Da is still driven to make his way into the town and seek some sort of redress. Again, a very good story that, without any real surprises, still manages to surprise. There’s a well-wrought aura of melancholy that permeates the story, even in the funny moments. Another author I’ll keep an eye out for in the future. 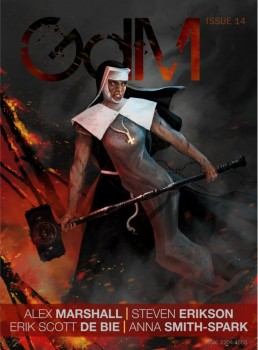 Grimdark Magazine continues to impress me, even when I’m not totally in love with its contents. My regard, as I’ve discussed in past reviews, is due to editor Adrian Collins’ persistent work at exploring the field of grimdark with substantial non-fiction pieces. To that end, Issue 14 contains interviews with Steven Erikson (Malazan Book of the Fallen) and Erik Scott de Bie (Forgotten Realms), reviews of The Armored Saint by Myke Cole and Smoke Eaters by Sean Grigsby, and an article on writing by Ann Smith-Spark.

The sole work of fiction this issue is “Beast of the Burnished Chain” by Alex Marshall. The novella’s world is one where power is split between the establishment Black Pope and the rebellious Crimson Queen. The protagonist is Sister Portolés, one of a special combat force in the Pope’s service. Portolés, like all her colleagues, was born monstrously deformed. In her case, she had a forked tongue that ecclesiastic surgeons stitched together. Her sisters were deemed “beyond redemption and burned accordingly.”

The Pope’s forces are hunting for the secret stronghold of a rebel force in Allagoch. Lured by the promise of fresh fruit in a cantaloupe field, Portolés and her comrades are ambushed and taken prisoner by the rebels. When a terrible monster appears, torture plans must be scrapped and captors and captives must join forces.

Portolés had seen a bear once, chained up at the fairground where she and her sisters had briefly found employ. This thing didn’t look anything like a bloody bear. It was a lot bigger than a bear, to start with, and instead of dark fur, its pale, oozing flesh shimmered in the light of the blazing farmhouse. Bears roared through a mouthful of fangs. This thing issued that haunting whistle through the small puckered opening at the end of its long, crenulated snout. A cluster of bulbous, ruby eyes protruded from the center of its misshapen head. And for all its terrible size and obvious intention, the monster moved less like a dire predator and more like a drunkard, careening straight at Portolés only to trip over its front paws and crash down at the edge of the tubāq field.

Marshall writes with economy and precision when it comes to describing the ensuing fight against the monster. It’s tense and he never lets the reader loose track of exactly what’s going on. It’s a great sequence, nicely ferocious and bloody.

My problem with the story is the worldbuilding. Portolés is presented as a nun, complete with a Catholic-style wimple, but she and the rest of her unit are hard-cursing and cynical. That makes sense on one level, as they’ve all been pressed into service, but they’re also offered up as devout, believing people as well. Not enough explanation or backstory is provided for the clashing presentation to come across as believable. The setting itself isn’t explored or described in enough detail either. The whole setup — war nuns, rebels, mad experiments — needs more background. It all feels too sketchy and in need of more development. Marshall’s prose is good, and there are some intriguing ideas at play, but in the end, I liked the story less than I wanted to.

And that brings another roundup to a close. Two magazines, three stories (plus a big clutch of non-fiction) for your consideration. Remember, just because I didn’t like a story, that’s not reason for you not to find out for yourself. And find out you should. If you want to read new swords & sorcery, you need to support it and let the authors and editors know what you think.