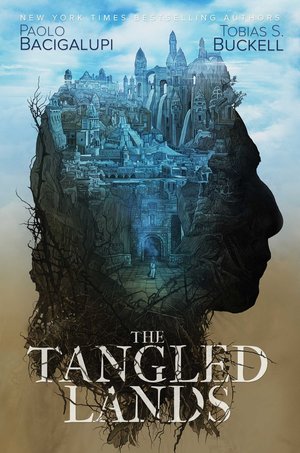 Well here’s an interesting superhero team up: The Tangled Lands, a collaboration between Paolo Bacigalupi, the Hugo Award-winning author of The Windup Girl and Ship Breaker, and Tobias S. Buckell, author of the Nebula nominee Ragamuffin and the best selling Halo: The Cole Protocol.

Bacigalupi and Buckell have collaborated before. They produced an audiobook anthology in 2011, The Alchemist and The Executioness, for Audible Frontiers. Subterranean Press eventually published their individual contributions as separate novellas. This is their first literary collaboration, and it looks very promising indeed.

From award-winning and New York Times bestselling authors Paolo Bacigalupi and Tobias Buckell comes a fantasy novel told in four parts about a land crippled by the use of magic, and a tyrant who is trying to rebuild an empire — unless the people find a way to resist.

Khaim, The Blue City, is the last remaining city in a crumbled empire that overly relied upon magic until it became toxic. It is run by a tyrant known as The Jolly Mayor and his devious right hand, the last archmage in the world. Together they try to collect all the magic for themselves so they can control the citizens of the city. But when their decadence reaches new heights and begins to destroy the environment, the people stage an uprising to stop them.

In four interrelated parts, The Tangled Lands is an evocative and epic story of resistance and heroic sacrifice in the twisted remains surrounding the last great city of Khaim. Paolo Bacigalupi and Tobias Buckell have created a fantasy for our times about a decadent and rotting empire facing environmental collapse from within — and yet hope emerges from unlikely places with women warriors and alchemical solutions.