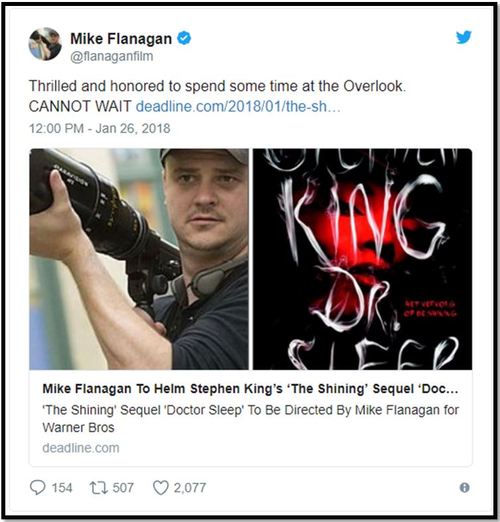 Having taken a rather long hiatus from reading Stephen King novels, I tentatively put a big toe in back in 2013, due to my love for The Shining.

Doctor Sleep is King’s sequel to The Shining and as you may know from my past posts, I loved it, which is saying a lot. However, what wasn’t much of a shocker was that King almost immediately sold the movie rights to Warner Brothers, and that Academy Award-winning screenwriter Akiva Goldsman stepped up to adapt Doctor Sleep. After all, Goldsman has had plenty of experience adapting other high-profile books such as The Da Vinci Code, The Divergent Series: Insurgent, and The 5th Wave, though those last two were meh…

However, we’ve now learned that following out-sized grosses on last summer’s movie adaptation of It, WB has put Doctor Sleep on the fast track. Mike Flanagan is set to direct the story, which picks up the life of tortured kid Danny Torrance (“Redrum!!”) now in his 40s and struggling with the same demons of anger and alcoholism that plagued his father and still haunted by the ghosts of the Overlook Hotel. Flanagan’s producing partner Trevor Macy will produce, along with Vertigo Entertainment’s Jon Berg. 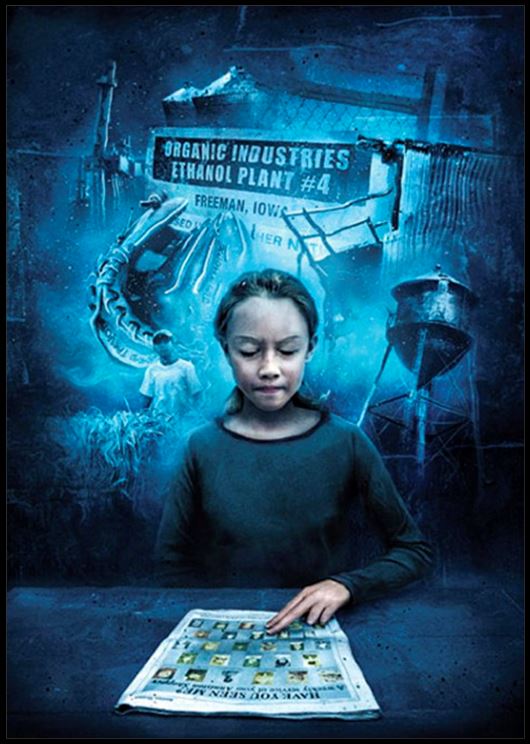 Flanagan will also rewrite Akiva Goldsman’s original script while Goldsman will now executive produce. Is this a good thing?

If you’ve read Doctor Sleep you may wonder, as I am, how the heck this story is going to translate to the big screen without coming across as incredibly cheesy. While Danny and all his jagged edges are brought to life partially through King’s own very real struggles with alcoholism, and Abra Stone is believable if creepy in the same way Danny was as a child in the Overlook Hotel, the villains in Doctor Sleep are something else altogether. Portrayed well, they could be as terrifying as any monsters. But if not… well… forgettable and campy would be the best we could hope for.

So while Goldsman may have won awards, his adaptation may also have been a wee bit too literal. Flanagan may take the creative license necessary to bring the horror from the imagination to the literal on the big screen.

Flanagan wrote and directed the horror hit Oculus, and he and Macy just teamed for the Netflix adaptation of the King novel Gerald’s Game. Flanagan and Macy are also currently in production on The Haunting of Hill House for Netflix, which I am anxiously awaiting. 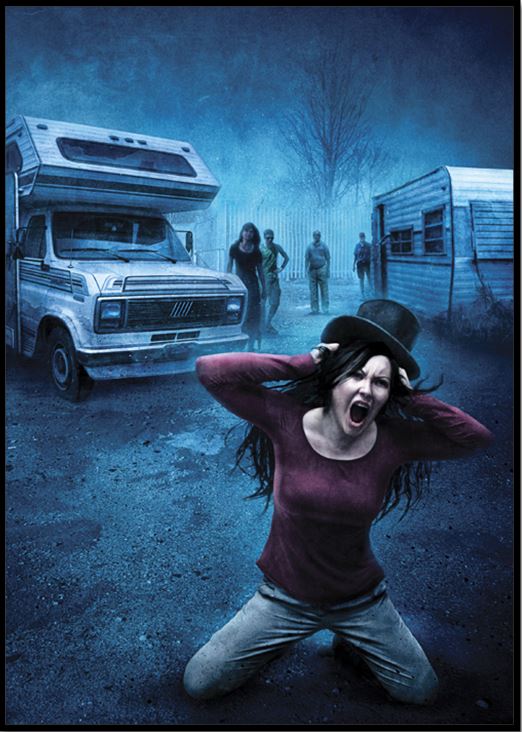 If you haven’t read Doctor Sleep yet, here’s a taste:

The novel catches up with little Danny who carries the trauma of the Overlook Hotel into adulthood. He’s become a reflection of his murderous father, with lingering rage and a drinking problem that dulls his pain as well as his “shining” powers. Those powers return when he embraces sobriety and uses his gift to help the dying at a hospice. He establishes a psychic connection with a young girl who shares his extreme abilities, and who is being targeted by a scary group with the similar abilities. They’ve found that their powers grow if they inhale the “steam” that comes off others with the power to shine, when they are suffering painful deaths.

Though we’re hearing it called “fast-tracked” all over the Hollywood virtual universe, there is no speculation of a release date or cast, though IMDB notes that John Cusack is interested in playing Danny. Between us I hope not, as I’m unconvinced Cusack could reach the level of inner torture necessary to play this older Danny convincingly.

Who do you think should play the adult Danny Torrance? Have you read Doctor Sleep since I last gushed all over BG about it? Post a comment or drop a line to sue@blackgate.com.