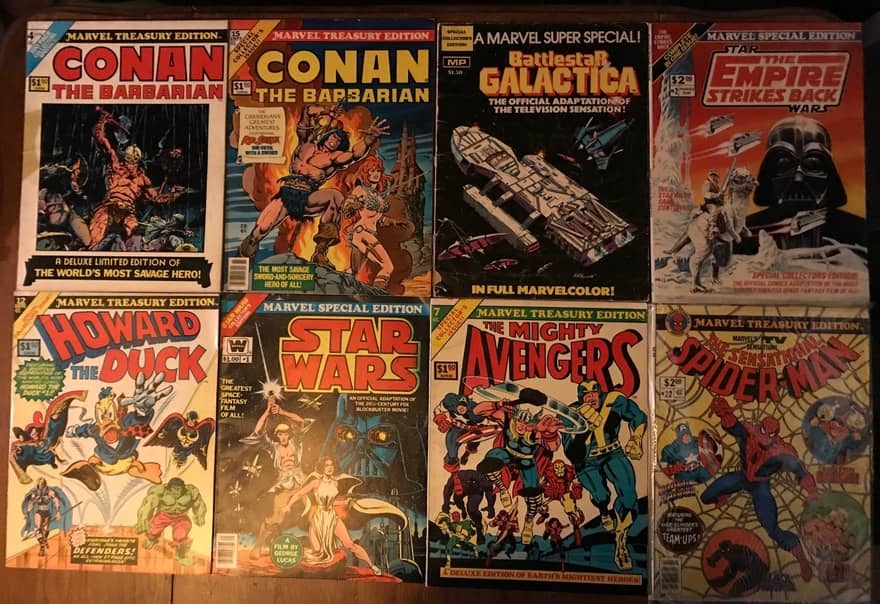 Ex-size-ior! Few things give me an exhilarating rush of childhood more than a Marvel Treasury Edition.

I see one and suddenly I’m five years old again, sprawled on the shag carpet by the bedroom door when I’m supposed to be asleep, that ginormous comic book spread out in front of me like a Life Magazine, surreptitiously turning the newsprint pages and delving into the four-color wonders of Spider-Man fighting a guy with a stegosaurus head or the Avengers flying across the sky to do battle with various nemeses or Conan hewing villains to rescue a curvaceous damsel.

Popular in the 1970s, Treasury Editions were mostly just reprints on Super Growth Hormone. They were, in a way, precursors to graphic novels: Each edition collected three or four comics from a series, sometimes with some new material thrown in.

Measuring 10” by 13”, they were striking. Part of the appeal to a younger reader would be the pictures are all bigger and more easily digested. I remember “reading” them before I could really read. 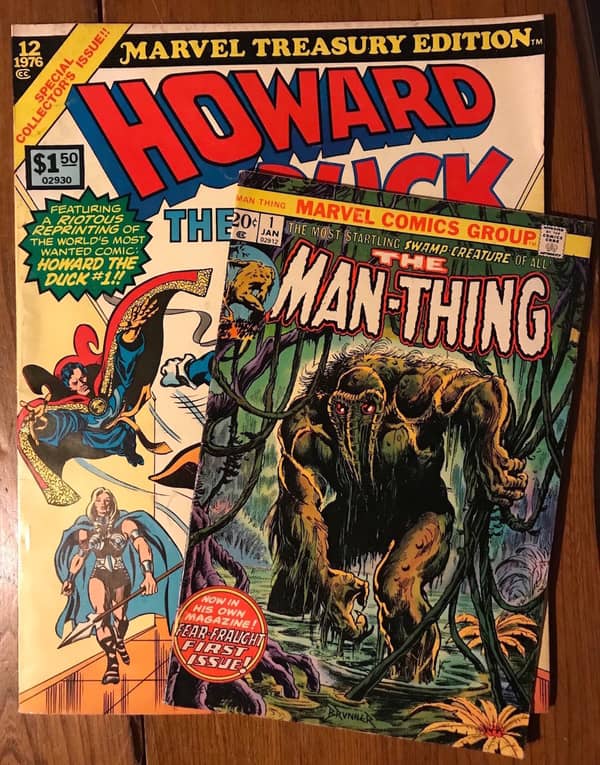 Now, as an adult fan, I have a new appreciation for their size: They are much closer to the scale of the original art. (Comic art is always shrunk down. The art you see in a standard-sized comic book is only about half the size of the original, which is typically drawn on 11” by 17” Bristol board.) So you see a lot more of the detail of the Buscemas (John and Sal) and Jack Kirby and John Romita and many of the other great Marvel Bullpen artists of that era. You’re seeing the pages very closely to what they look like before they are sized down and sent to press. Because there’s so much more interest in the art these days, I’m kind of surprised the format hasn’t made a comeback.

About fifteen years ago you could still get them for next to nothing, but in recent years their collectability has really taken off. The Holy Grail is the 1978 DC Treasury Edition of Superman Versus Muhammad Ali. A copy of that in very fine condition goes for anywhere from $200 to $500.

(Quick story: When we were kids, my Nan would take my cousins and me to a store called Pic ‘n Save, one of those outlets that sells clearance and overstock items. I found so many treasures there, but one I passed up was the Superman Versus Muhammad Ali Treasury Edition. They had maybe 20 overstock copies of it on the shelf for less than a buck apiece. Wish I could go back and tell my 8-year-old self, “Convince your Nan to BUY ALL OF THEM, and ask if they have any more in the back! Then take ‘em home and put ‘em away for about 40 years.”)

More mundane titles like the ones in my collection can still be found for under $10 for battered reading copies. Pristine issues suitable for collecting can go for many times that. Don’t pass them up if you get your hands on one! I don’t see these ever going down in value, and my sage prediction is that their desirability will continue to get BIGGER. ‘Nuff said.

There are many things I regret not collecting, and the Marvel Treasury Editions are near the top. Like you, I remember reading copies in my local comic shop in the early 80s. The shop didn’t seem to know how to store them, so they were just awkwardly on display in the back. There were fairly cheap, and no one seemed to want them.

I wish I’d bought them now! Especially the Avengers and Howard the Duck issues.

I was a rigidly loyal DC partisan in my youth, so I never had any of these Marvel Treasuries, but I had a ton of the DC versions. I especially like the ones that reprinted Golden Age classics, like the giant reproduction of Action #1.

The Avengers was the first one I wanted to reclaim when I was an adult. And that Spider-Man one, because of my vague, strange memories of the guy with a stegosaurus head leading an army of dinosaurs…

With a few exceptions, I’ve always been a “Make Mine Marvel!” guy. But I don’t have any aversion to the DC Treasury Editions; just none have made their way into my collection yet. (Oh man would I love that Superman Vs. Muhammad Ali.)

I had the Empire Strikes Back issue you have pictured above and wore it out. I can remember using a broom stick or wiffle ball bat as a lightsaber and posing like Luke Skywalker in each frame of the battle with Darth Vader. The frame by frame approach of comics made me think that I was learning how to really use a sword well in battle (or at least a broom stick of wiffle ball bat!).

I did not realize the format was so much bigger. I’ve been keeping my eye out for the Marvel graphic novels series. Those are smaller than the treasury editions but larger than the standard comic size.

Marvel doesn’t collect the graphic novel series and most of them aren’t available digitally yet.

I hope it’s all right to mention this. A website Mike’s Amazing World of Comics is a HUGE site devoted to cmic covers and if you type in Marvel Treasury you can see all the covers. He has recently retred from posting current material but it’s a godsend for referemcing characters, titles and writer/artist information. The Grand Comic database has its use as well but I tend to check Mike’s first then the GCD. Hope this helps the comics collectors out there.

Note John: To my surprise in my own collections I only have s few of DC limited collector’s edition. I had actually forgotten about the avengers issue as I’m 22 issues away from finishing the run (for the 5ht and final time). The Howard the Duck appeals to me ONLY because of the Defenders (which I do have a complete run of) and I covet the Frank Brunner Dr. Strange issue -for the cover.

Thanks Allard, it would be interesting to see how many of them were produced!

The ESB edition was one I had at when it first came out too. I remember drawing lots of pictures of tauntauns.

Hmmm….I just Googled tauntauns to make sure I was spelling it correctly, and see that on the Star Wars Database they are described as a species of “snow lizard.” Nothing about them has ever struck me as lizard-like: their features, their hair, their horns all signal mammalian. Strange.

I bet whoever wrote that description is from a post-Jurassic Park generation. If you saw that movie first, I can see how you might think of the tauntauns as raptor-like.

But we know who came first!

I still have several of these from my childhood. I’d have to get an advance on my $0.50 per week allowance to buy them and never regretted it once. My favorite of the ones I own is The Savage Fists of Kung Fu -I’ve always been a sucker for anything with savage in the title.
I also have several of DC’s big super sized comics. My pride of those is Superman vs. Muhammad Ali