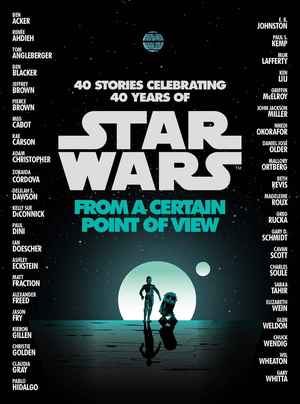 I’m a massive Star Wars fan and grew up loving the Expanded Universe novels. My first exposures to writing greatness were people like Timothy Zahn, Christie Golden, and Kevin J. Anderson. When Disney announced that the Expanded Universe wasn’t canon anymore, I was pissed like a lot of people, and as much as I’ve enjoyed the new films, I couldn’t bring myself to read any of the new fiction.

Is that petty and stupid? Probably, especially when you consider the caliber of writers who are being brought on to write the new EU. And that if I’m ever at a career level to be offered a spot in that canon, I’ll probably take the deal.

So I finally shook off my old-timey stubbornness and bought a copy of the new anthology From a Certain Point of View. Big surprise: I have mixed feelings about it.

On the one hand, there are some amazing stories here. “Master and Apprentice” by Claudia Gray shows the ghost of Qui-Gon Jinn visiting Obi-Wan Kenobi before he takes Luke to Mos Eisley, and it’s touching and tragic because Qui-Gon knows what’s about to happen to his former apprentice. Wil Wheaton reminds us about the sacrifices of the average rebel in “Laina,” and Nnedi Okorafor brings us into the mind of the Death Star’s dianoga in “The Baptist.” There’s a great combination of writers, including a few Star Wars veterans (Christie Golden among them) and the likes of Ben Blacker, Mur Lafferty, Chuck Wendig, and more.

The problem is I’m looking at my weathered copy of Tales from the Mos Eisley Cantina, and I can still vividly remember the stories in that collection. I can see Greedo fleeing with his family from Navik the Red, ending up a street kid on Nar Shaddaa and then hoping to make a name for himself by collecting the bounty on Han Solo. 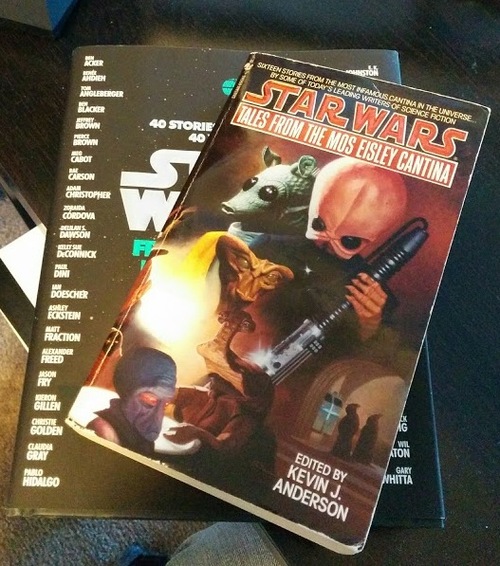 Why Han? Because in Shug Ninx’s repair shop on Nar Shaddaa, Han made him feel like a kid, and that still rankles the poor Rodian to the point that he takes a stupid risk and gets himself killed. (No joke, I pulled those details out of my head while writing this post, and then double-checked them. No errors.)

The story of Greedo I know was told by Tom and Martha Veitch in 1995, and I can’t enjoy the story Renee Ahdieh presents in “The Luckless Rodian.” Or any others that feature characters I already know.

I also fully recognize that it’s unfair to discount these stories because of that, especially since no one got paid for these stories, and the money from sales goes to charity. Point of View wasn’t put together for me. It was put together for my students’ generation, so they can fall in love with Star Wars like I did, and in a couple decades I’ll be meeting younger writers who got their start reading it.

At the end of the day, inspiring people is part of what Star Wars is about, so I’ll just accept that at 28 I’m capable of being an old fossil, and let the kids have their fun.

You know why I was excited about this book? Because a list of contents was posted that included a story titled “Whills,” which could not have thrilled me more. Since reading the 1976 novelization as a child, I’ve wanted to know who the authors of the Journal of the Whills were, and now it seemed we were finally getting a canonical answer!

Then I read the story, and–without spoiling it–found a throwaway joke instead.

Yes, I get it’s for charity. Still felt like a slap in the face.

I too was a huge fan of the ‘Tales’ series and had hoped the tradition would continue with the PT (Tales from the Podracer Garage, Tales from The Galaxies Opera House, anyone?). I even launched a ‘Tales from Dex’s Diner’ thread on my old blog. All that aside – I have to agree with you regarding this new collection. More misses than hits, and I feel terrible for saying that, but it seems to be a common problem lately with writers being more self-reflexive than they need to be.

My reason to ignore the new continuity was that I actually didn’t really enjoy anything outside of the “90s Continuity” (even though some the Jedi Knight games came out in the 2000s). I didn’t care for all that Clone Wars stuff and never felt like even looking into the Legacy material. So why try getting into yet another different continuity, especially after Force Awakens and Rogue one were my two most disliked Star Wars movies ever?
I’m happy with my three movies, my Thrawns, X-Wings, and Jedi Knights.

Just a “Product” that the big behemoth corporation known as Disney bought as one of their properties that they endlessly chew up and regurgitate expecting tons of money as they covet their CopyWRONG hold on most of popular culture.

Really – a neat way to express it to suggest you pick up SkyDoll: Decade… On the surface it’s Heavy Metal fodder, excellent art, robotic love doll escapes, etc. But it was done by the team that produced “W.I.T.C.H.” who explained they did that to blow off negative aftershock after working for Disney. The intro alone is worth the book.

So – IMO – there’s no such thing as Star Wars. A product named that. Legacy products, yes.

Burroughs said – and I don’t mean the Tarzan/John Carter one – “If the powers that be ask you to sell out, sell out to them but charge them dearly…”

Well, I can’t say I’d not give my cherished creations and creative work to Disney for $500 million, that’s about my sell-out point… (Private tropical island with micro nation status, end of service but good condition tanker ship converted into floating home, $30 million in cash and currencies)

But – Mr. Lucas did sell out. Now the spirit is gone from his work. I couldn’t get through the first 20 minutes of “The Force Awakens” frankly.

He sold out. You know, Todd McFarlane literally depicted a “Special place in Hell” for creators who sold their work out to the big companies… Early “Spawn” stand alone issue…really good.

Gone is the modern myth. The layers of meaning. A tribute to classic space operas using “Modern” tech to make them workable on the big screen. Psychic aftershock from a Jewish man on the Nazis and WW2 and fear of another evil leader harming innocents for power. A great nation tricked into pointless, evil wars to benefit the machinations of elites. Mythological ideals, from Campbell and Jung’s archetypes… The Hero’s Journey…

Really – my “Expanded Universe” was the Marvel comics one. Full of Green bunnies, red skinned Zeletrons. My Porg is some kind of Rabbit called the Huukah.

The expanded universe was great, and at first started out to be separate but then the Marvel stuff got wedged in here and there.

But this Disney stuff…

Well, let me put it this way… There’s a comic so Gawdz-Awful that it is getting mocked all over. A Han Solo solo comic, forgive the alliteration… Well, the artist is obviously taking images from the movies and tracing or just photoshopping them into the art… Sometimes Han’s face appears almost tubular as if it’s going to stretch out from his face or just that 1-3 degree forced tilt that creates “Uncanny Valley” along with “Hey, this is from the movie when Han said…”

So, there’s this big mutated evil diseased mouse towering above a huge wreckage of the modern popular culture chewing up and regurgitating again and again…. “Kids… Old and young… I owns your childhood memories… I covets themz… You pay me, I ownz the Copyright, I covets… Pay me… Bloooaghhhh!!!!”

Really, I used to say that in “Mainstream Culture” there were TWO things I actually liked… Star Wars and modern Coffee. Yep, always bought some Star Wars product now and again… And love all the crazy modern coffee, Starbucks and all that….

Now, going to dig out some of my ancient Marvel Star Wars that I’ve read to near ragged condition and do my nightly drawing practice and try not to scream and shout and throw something…