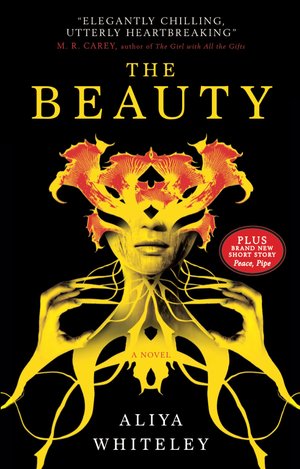 I don’t know about you lot, but I like my dystopian horror filled with cosmic weirdness, strange fungi, and terrifying tales told around post-apocalyptic campfires.

Okay, that’s fairly specific. I blame the pre-release copy for Aliya Whiteley’s novella The Beauty, which has admittedly sparked my imagination. The Beauty was originally published in the UK in 2014 by Unsung Stories, where it was promptly nominated for the Shirley Jackson and Saboteur awards, and chosen by Adam Nevill as one of his favorite horror tales. He calls it “A story of cosmic fecundity and fungal weirdness that I couldn’t put down.” Kirkus Reviews labeled it “gut-wrenching… renders a world that exists somewhere between post-apocalyptic and fable-esque… unforgettably grotesque.” It arrives in trade paperback next week from Titan Books.

Somewhere away from the cities and towns, in the Valley of the Rocks, a society of men and boys gather around the fire each night to listen to their history recounted by Nate, the storyteller. Requested most often by the group is the tale of the death of all women.

They are the last generation.

One evening, Nate brings back new secrets from the woods; peculiar mushrooms are growing from the ground where the women’s bodies lie buried. These are the first signs of a strange and insidious presence unlike anything ever known before…

See all our coverage of the best in upcoming fantasy, SF and horror here.