Algis Budrys was born on January 9, 1931. He died on June 9, 2008. In addition to his career as a writer, Budrys edited and published the magazine Tomorrow, first in print and later on-line. He was also active in promoting the Writers of the Future contest and wrote a long-running and very influential book review column in Galaxy Magazine entitled Benchmarks, many of which were collected into book form in 1986. He was a Guest of Honor at LoneStarCon 2, the 1997 Worldcon in San Antonio. Budrys was inducted into the First Fandom Hall of Fame in 2007 and received the Pilgrim Award for lifetime contribution to SF and fantasy scholarship from the Science Fiction Research Association the same year. In 2009, he received one of the inaugural Solstice Awards from the SFWA.

“Silent Brother” was first published under the pseudonym Paul Janvier in the February 1956 issue of Astounding Science Fiction, edited by John W. Campbell, Jr. and was reprinted five months later in the British edition of the magazine. When Judith Merril included it in SF: The Year’s Greatest Science-Fiction and Fantasy Second Annual Volume the next year, it was attributed to Budrys. Budrys included it in his collections Budrys’ Inferno, The Furious Future, and Entertainment. Isaac Asimov and Martin H. Greenberg included it in The Great SF Stories #18. The story has been translated into German and French. 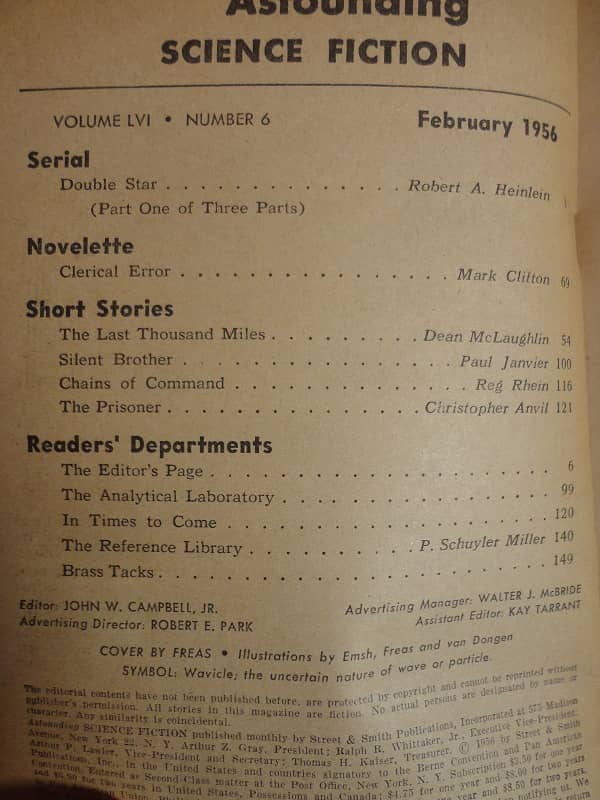 Although the story opens with the return of the first manned interstellar to Alpha Centauri, the action follows Harvey Cable, who was involved with the early stages of the mission, but is now living alone and uses a combination of a wheelchair and canes to make his way around the house. Feeling forgotten and waiting for his comrades to visit him, he learns that they are being sequestered by the government following their return. At the same time, he learns that his television has disappeared in the middle of the night. Searching the house for a means of entry before calling the police, he discovers the television in his basement, its innards ripped out and clearly being repurposed for something else. Cautious and methodical, Cable discovers that he is somehow going into the basement while he sleeps and is working on the television himself.

Budrys’ story is a first encounter story with an alien who appears benevolent and is quite unlike other aliens. The story is one of hope, although it doesn’t really give a lot of details about the aliens, nor how they operate, giving the sense at the end that Budrys has set up a much longer story. Budrys has already completed the part of interest, allowing the readers’ speculation take it to a logical conclusion, though since Cable is only just learning about what has happened there is some ambiguity in his assessment of the situation.

[…] Gate continues its birthday review series, this time celebrating Algis Budrys, an author with, IMO, one of the highest actual-greatness-to-acknowledged-greatness […]