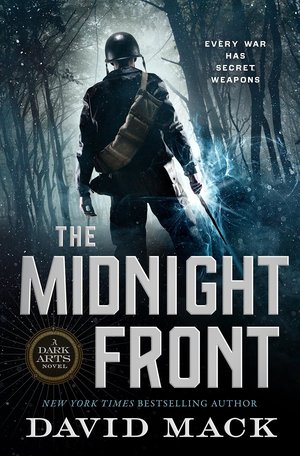 David Mack has built his rep chiefly on Star Trek novels, such as the Star Trek: Vanguard series, and the new Star Trek Discovery tie-in novel Desperate Hours (which Derek Kunsken reviewed for us here).

His latest is a World War II-era adventure in which an American soldier finds himself up against Nazi sorcerers. Kirkus Reviews calls it “Propulsive… Equal parts brimstone and gunpowder… an entertaining scenario that wouldn’t be out of place in a video game or a spirited match of Dungeons & Dragons.”

The Midnight Front is the opening novel in the Dark Arts series; it arrives simultaneously in hardcover and trade paperback from Tor in January. It will be followed by The Iron Codex, set in the 1950s; and Shadow Commission, set in the ’60s.

On the eve of World War Two, Nazi sorcerers come gunning for Cade but kill his family instead. His one path of vengeance is to become an apprentice of The Midnight Front ― the Allies’ top-secret magickal warfare program ― and become a sorcerer himself.

Unsure who will kill him first ― his allies, his enemies, or the demons he has to use to wield magick ― Cade fights his way through occupied Europe and enemy lines. But he learns too late the true price of revenge will be more terrible than just the loss of his soul ― and there’s no task harder than doing good with a power born of ultimate evil.