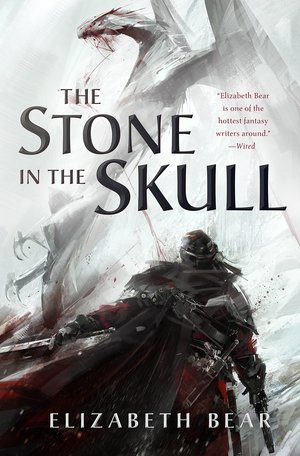 Elizabeth Bear won the John W. Campbell Award for Best New Writer in 2005, and followed that in quick succession with two Hugo wins: in 2008 a Best Short Story nod for “Tideline,” and in 2009 a Best Novelette award for “Shoggoths in Bloom.”

Her biggest commercial hit so far has been her Eternal Sky trilogy (Range of Ghosts, Shattered Pillars, Steles of the Sky). Last month she returned to the world of Eternal Sky with a brand new trilogy, The Lotus Kingdoms, which kicked off with The Stone in the Skull, now available in hardcover from Tor.

The Stone in the Skull, the first volume in her new trilogy, takes readers over the dangerous mountain passes of the Steles of the Sky and south into the Lotus Kingdoms.

The Gage is a brass automaton created by a wizard of Messaline around the core of a human being. His wizard is long dead, and he works as a mercenary. He is carrying a message from a the most powerful sorcerer of Messaline to the Rajni of the Lotus Kingdom. With him is The Dead Man, a bitter survivor of the body guard of the deposed Uthman Caliphate, protecting the message and the Gage. They are friends, of a peculiar sort.

They are walking into a dynastic war between the rulers of the shattered bits of a once great Empire.

Tor.com usually offers up sample chapters of new Tor releases, and they didn’t disappoint us this time. Check out Chapter One here, and Chapter Two hidden in a completely different place here.

Glad to hear it Joe!