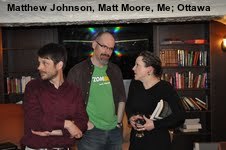 Like most other writers, I’ve given all kinds of readings, from story books to pre-schoolers (supporting early literacy) to academic papers on 18th-century pastoral poetry (supporting my academic career). I’ve had everything from great experiences (the kids really liked the animal noises) to eye-rolling ones (someone should have told the hotel hosting the NEASECS Conference that we would need lecterns) to amazing ones (people turned out at 8:30 on a Saturday morning to hear about the georgic).

I’ve had a room full of people show up, and I’ve had no one show up at all. I’ve arrived at places that invited me, only to find no one there who knew I was expected, and, I’ve been taken out for dinner first. I’ve read the same piece to both thunderous applause, and polite smiles. Altogether, a pretty mixed bag, and I don’t think there’s a single writer out there who can’t match me, story for story. So why am I taking you on this trip down readings-I-have-done lane? Because, while there’s not much you can do about the audience, there are organizers out there who get everything else right.

As some of you already know, I’ve been invited several times to participate in the Chiaroscuro Reading Series (ChiSeries for short), sponsored by the fine Canadian small press, Chizine Publications (CZP). The first and most important thing I can say about this series is that, well, it’s a SERIES. To start with, this means that by the time I came along, the event was not their first readeo. It means that they have some experience in throwing a reading, month in, and month out. So they know what’s important about the physical set-up, things like lecterns, seats, tables, lighting, microphones, and so on. They also know about the “people” aspect of things. There’s a well-chosen mix of readers. There’s someone to meet the readers, look after them, make sure they’re comfortable and watered. Let’s not forget introducing them in an entertaining way, and breaking-up the readings so that the audience has a chance to go to the bathroom and order drink/food. No one feels read AT, everyone feels read TO. 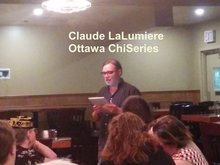 All of which means they have a group of regular attendees (admittance is free) who are likely to show up every month whether they’ve heard of you or not – which, incidentally, means you’re not just reading to the converted.

Did I mention that the venue is a bar? Okay, usually a small bar, but that means they can book the whole room, so you have no other groups or noisy neighbours to contend with. It means there are refreshments and food for readers and attendees – the kind of food and drink you actually want and willingly pay for, not the kind you take to be polite. Also a big plus: the bar’s within easy walking distance of public transportation.

I’d also like to make clear that I’m not myself a Chizine author. That’s right, they’re sponsoring a reading series for everyone who writes speculative fiction, not just as a showcase for their own authors. And while they do have their own book table there, they also provide a table for the rest of us. And if we find ourselves a tad busy, they’ll sell the books for us too.

And if all of this wasn’t enough, THEY PAY HONORARIUMS. That’s right, and not just to me, who usually has to travel to get to these events, but to all the readers. Chizine are pros all the way, and they treat their author guests as pros.

The ChiSeries began in Toronto, spread to Ottawa, then Winnipeg and Vancouver, with a shorter version in Peterborough. There’s a small group of people in each locale committed to maintaining the high standards of the series. There may already be a well-run series like this one in a bar near you, but if there isn’t, now you know how to plan for one.