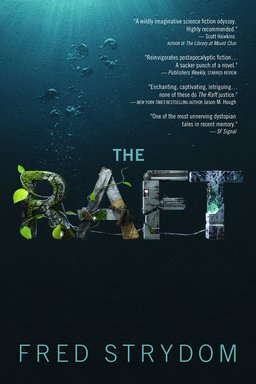 Fred Strydom’s debut novel The Raft was published in hardcover last year, and the B&N Sci-Fi & Fantasy Blog called it “One of the sharpest premises in 2016… a must-read.” In a starred review, Publishers Weekly said “Strydom’s debut subverts postapocalyptic fiction… [it] reinvigorates the genre with a suspenseful concept and intimately realized characters. A sucker punch of a novel.”

I never saw the hardcover, but the trade paperback reprint from Talos caught my eye at the bookstore last week. Have a look.

“The day every person on earth lost his and her memory was not a day at all. In people’s minds there was no actual event . . . and thus it could be followed by no period of shock or mourning. There could be no catharsis. Everyone was simply reset to zero.”

On Day Zero, the collapse of civilization was as instantaneous as it was inevitable. A mysterious and oppressive movement rose to power in the aftermath, forcing people into isolated communes run like regimes. Kayle Jenner finds himself trapped on a remote beach and all that remains of his life before is the vague and haunting vision of his son.

Kayle finally escapes, only to find a broken world being put back together in strange ways. As more memories from his past life begin returning, the people he meets wandering the face of a scorched earth — some reluctant allies, others dangerous enemies — begin to paint a terrifying picture. In his relentless search for his son, Kayle will discover more than just his lost past. He will discover the truth behind Day Zero — a truth that makes both fools and gods of men.