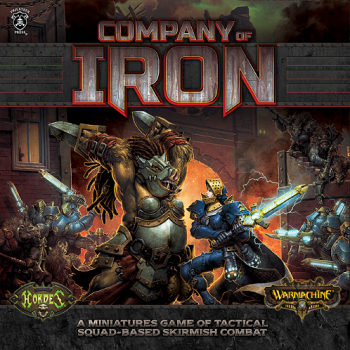 I’ve covered a number of new games that I saw at Gen Con, including fantasy deck-building games, science fiction games, and youth games. Some games, though, are hard to classify under a large thematic umbrella, defying the tight boxes of genre. Here I’d like to touch on some of those games.

In Warmachine, you create an army commanded by a unique warcaster, and comprised of their large, magical, steaming metal constructs called warjacks, supported by units of troops, solo soldiers, and officers. Their companion game, Hordes, is fully compatible, but the warlocks in Hordes use a slightly different magical mechanic to command their feral, rampaging warbeasts. You assemble an army by picking one of the available factions, and then buying, assembling, and (hopefully) painting your miniatures to represent your completed army. The folks over at Penny Arcade have recently begun broadcasting full games of Warmachine for your viewing pleasure, if you want to see what it’s all about. But Privateer Press has major expansions on the horizon for their game lines.

This summer, Privateer Press released Grymkin: The Wicked Harvest, a dark fey-themed faction for Hordes. These are some truly great miniatures, from the child warlock known just as The Child (complete with her companion and protector, Dolly) to the warlock The Dreamer (along with three solos representing fragments of her dream power) to the grotesque porcine Piggybacks and the darkly amusing Neigh Slayers. Words really can’t do these miniatures justice, so check them out on the website.

For those who are already players of Warmachine and Hordes, some of the big news of interest is their MiniCrate. There are still a little over 4 days available to sign up to get exclusive miniature sculpts starting from the first crate. The first miniature being released is the seductive Swamp Siren, which is a variant sculpt of the Hordes heavy wearbeast the Swamp Horror.  The regular membership is monthly, but subscribers who sign up for a 6-month VIP membership also get a 7th unique miniature, the intriguing di Wulfe in Sheep’s Clothing, based on the “rogue alchemist” character that was one of the earliest Mercenary solos in Warmachine. You can see the Swamp Siren and di Wulfe unique sculpt here, and also sign up for the MiniCrate subscription.

For one thing, they’re planning to release new factions for the game, on a cycle of about a Faction annually. The first new faction, slated for sometime in 2018, has me drooling. The Crucible Guard is a group of alchemists and arcane mechaniks, and their technology is a step or two even beyond the technomagical level of the most advanced existing factions. The figures described to me were basically Rocketeer-style soldiers with jet packs and laser pistols. You can get a peek at a couple of these upcoming Crucible Guard unit figures from this faction if you scroll down along this thread at the Privateer Press forums.

Finally, but certainly not least, Privateer Press is releasing their Company of Iron skirmish game this fall. While the focus of Warmachine and Hordes is on large-scale battles of armies commanded by warcaster and warlocks sending massive heavy warjacks and warbeasts against each other, Company of Iron focuses on smaller-scale battles using units, solos, and maybe some light warjacks and warbeasts. The game can be played with miniatures from the existing game, using their current statistics and powers, but the starting box from the game will also include new miniatures, including two new solo characters than you can then use in Warmachine and Hordes. 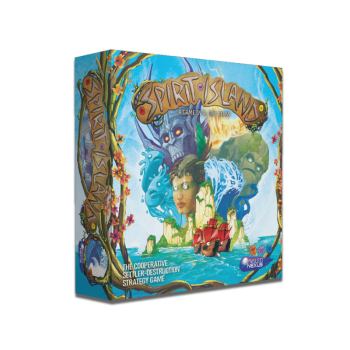 Spirit Island is an intriguing game that asks the conceptual question “What if Catan didn’t like the settlers?” (but without any copyright infringement). You play nature spirits on an island that is being invaded by outside settlers who are building towns and cities, and, frankly, you don’t care for these newcomers and their strange ways. In order to retain your power and safeguard your island, you must drive out the settlers, protecting the native inhabitants along the way (if you can).

The game company Greater Than Games sold out of this game, but I watched some demos being played and every time I came past their tables people were engaged and singing its praises. There are a variety of unique nature spirits, which allows for a good level of replayability, and the modular design of the island is fascinating, with different configurations based on the number of players. In addition, everything about the game, from the box to the island tiles to the miniatures and native huts, are absolutely visually stunning. Though the game is currently out of stock, it is available at Amazon for order when it comes back in stock (or talk to your local gaming store).

One of the key figures in the golden age of science fiction was editor John W. Campbell, Jr. He is well known as the man who, as editor of Astounding Science Fiction, cultivated and popularized budding young authors like Isaac Asimov and Robert Heinlein. In addition to being foundational to the rise of science fiction, Campbell is also the author of a little story with the title “Who Goes There?” If you’ve never heard of it, you’ve probably still heard of it … because “Who Goes There?” is the short story that inspired the film The Thing.

A board game inspired by that story (and film) is coming out, The Thing: Infection at Outpost 31. If you’ve read the story or seen the film, then you can guess that this is a betrayer game where one of the people at Outpost 31 has nefarious intentions. You have to work together to achieve the goals to stop the invading alien life form, even while suspecting that another player might secretly be working against you.

The Thing: Infection at Outpost 31 is slated for a release later this month, and is available for preorder through Amazon or your local game shop.