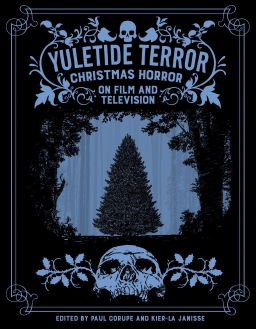 As the year begins to burn itself out, as the light of summer gives way to long ghoul-ridden nights, as the cold grows a little more each day like spadefulls of earth slowly burying a coffin, what better time to think ahead to the horrors of Christmas? Not the pedestrian horrors of shopping and family, but the deeper terrors of knifemen and ghosts and dark-souled elves: the traditions of the season. Publisher Spectacular Optical’s planning a celebrate of exactly those kinds of Christmas frights, with their upcoming volume Yuletide Terror: Christmas Horror on Film and Television.

They’re currently running an Indiegogo campaign to fund the book, which will boast two dozen essays and interviews looking at Christmas horror films from A Christmas Carol on, as well as more than 200 reviews of seasonal horror movies. The book includes stills, comics-format reviews from Rick Trembles, and illustrations from artist Alisdair Wood. Contributors include Michael Gingold (former editor-in-chief of Fangoria and current Online Editor for Rue Morgue), Andrea Subissati (Rue Morgue‘s Executive Editor), pulp scholar Andrew Nette, and genre mainstay Kim Newman (writer of, among other things, the Anno Dracula series, several Warhammer tie-ins under the name Jack Yeovil, and Now We Are Sick, a collaboration with Neil Gaiman).

Spectacular Optical is a small press that focuses on “collectible film and pop culture books,” owned and directed by Kier-La Janisse, former programmer for the Alamo Drafthouse and founder of The Miskatonic Institute of Horror Studies. Their previous books include KID POWER!, about cult kids’ movies, Satanic Panic, about the 1980s fear of satanism in popular culture, and Lost Girls: The Phantasmagorical Cinema of Jean Rollin, about the fantasy-horror-underground-exploitation director. Janisse edits Yuletide Terror alongside horror film critic Paul Corupe; you can see an excerpt from the book here. Worth noting that a short film’s being made to accompany the book launch, a tale of terror that looks back to the tradition of classic British Christmas ghost stories. The Indiegogo campaign for Yuletide Terror only runs another 8 days. Horror fans can check it out here!

This would be so much fun to read.