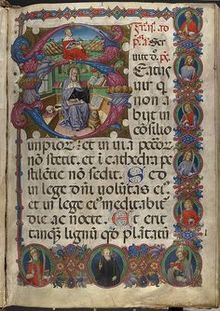 In case I haven’t mentioned it before, my brother owns the last independent bookstore in Kingston, Ontario. Which goes to explain why it’s was only this week that I bought a Kindle. For the first time in my life, I’m reading in a different way.

Reading, and its broader form story-telling, has been around as long as history, and it’s been changing and evolving all along, with new ideas and new technologies.

Some think the first stories were told by shepherds sitting around on hillsides watching sheep. As exciting as sheepherding can sometimes get (wolves anyone?) there’s considerably more leisure time in this occupation than there is in farming, or fishing. The shepherds would come down from the hillside and tell their stories to the people in the village, and the marketplace storyteller was born. Or so reasons this particular school of thought.

What happened to the marketplace storyteller? Well, memorizing all of Homer et al (in case there were requests) and learning how to recite them in an entertaining way is really hard work. Then you have to come up with your own, original stories, or really, you’re nobody. You have to put literally years into learning all you need to know, and then you have to sit somewhere telling stories and hoping that people will pay you for it. If you’re very good, someone may become your patron and keep you on retainer to tell stories for them and their guests. 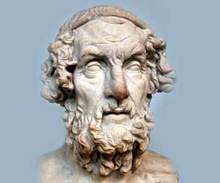 Eventually someone was bound to think that it would be much easier all around if that writing thing that people had been using to keep accounts and minutes of meetings could also be used to write down the Iliad, and the Odyssey, and the Idylls of Theocritus. The storyteller who could read still read them in public, since not many other people could.

Mind you all of this writing had to be done by hand, and the person who came up with the stories either had to know how to write, or have someone take dictation. (Right up until the 1940’s it wasn’t unusual for writers to write out their manuscripts by hand and send them out to be typed.) Copies of existing books also had to be written out by hand, and since you were going to the trouble, you might as well throw in some nice pictures and coloured margins.

By the way, just how were all these people able to write huge novels by hand? (Yes, I’m looking at you, Cervantes) Simple, no television.

Thank the Muses for Guttenberg. Without him we’d still be sitting in a public place somewhere listening to a book being read aloud by someone else. And it would be the same book(s) over and over again, since obtaining a hand-written copy would be terribly expensive. 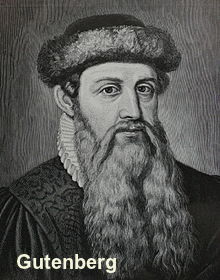 Which is why when the Pre-Raphaelites and the Arts and Crafts movement began making books by hand again, it didn’t last very long.

Finally the 20th century. In my lifetime people have gone from writing books on the typewriter (including electric and electronic versions of same) to using a variety of word processing programs on their personal computers (including laptop and tablet versions of same). Editing, revising, proofreading and galleys are all done on a computer now. Manuscripts don’t get mailed to agents and editors, they get sent electronically.

But that’s writing. Up until sometime in the 1990’s reading a book was pretty much the same experience as it had been since Guttenberg. Even now, there are millions of regular readers who don’t use an e-reader. With the speed of technological innovation in the present day, I’m betting that in another 30 years, we’ll be using something different, and e-readers will be quaint things our parents are still using.

But we’ll still be reading. Technologies and fads come and go, but reading always remains.

In case you think I should be more worried about my brother, and Novel Idea his bookstore, he says it isn’t (or wasn’t) the advent of e-books that endangered bricks-and-mortar stores. Sales at independents began to drop long before the e-reader was ubiquitous. The problem wasn’t Kindle, but the appearance of the “box store” like Barnes and Noble, or Borders, or, here in Canada, Chapters Indigo. Ironically, Chapters seems to be selling fewer and fewer books, and more and more knick-knacks and kitchen weasels.

So my brother’s not surprised that the Chapters down the street from Novel Idea closed not that long ago. He reports that his sales are back to pre-box store levels. That’s pre-e-book levels too, so I’m not worried about telling him that I’ve bought a Kindle.

I recently read a CNN article that said ebooks and kindle sales have declined for the past theee years and print has seen an increase over that same period.

Something I’ve been thinking about. The problem with technology is that it gets outdated. People probably won’t be able to use their eReaders in thirty years because nothing will support them. So you won’t be able to download any new books.

To Glen: I’ve heard the same thing. There’s also the problem that if for some reason the power fails, we lose access to all electronically stored information, including, perhaps, how to get the power running again.

The lack of support is a separate problem, but still an important one. All of us already have outmoded technology kicking around the house, or on its way to a safe disposal. VHS tapes anyone?

Personally I love “E-Readers” – haul my Samsung Galaxy Tab A around everywhere – to India and back so far. Type like mad on it with a $13 Bluetooth keyboard and love how I can make my stories and publish them online. Also I used to lug around a backpack full of books. Now it’s the notepad, a canson art pad for sketching/idea drawing and a pencil case with various art pens. All in a neat bag, one I got in India also.

I do long for public spaces, public storytelling, public socializing. Most of what we have is bars (lousy, aggressive mating games) stores (buy and get out) and of course the coffeshops – piercing factory employees constantly making loud grinding with the machines even if it seems they take 15 minutes per customer in a line.

I miss Borders but they really slit their own throat and Hastings did and now Barnes and Noble might… Kid’s toys… So I get to deal with kids running around playing with “Gak” but if I get nostalgic and might look for a hard copy of Winnie the Pooh or see if they re-print “Choose your own Adventure” and go in the Kid’s section some employee bursts out of the woodwork “Can I HELP YOU!?!?!” like I’m Chester the Molester about to pull out a burlap sack, grab a few brats and run off in the van with ‘free kandy’ written on the side.

What I’d like to see is the “Public Space” return. If I ‘won the lottery’ I’d do it tomorrow.

Buy up some empty box store – like an abandoned K-mart or Sears.
Partition some of it off to be stores. No favoring big box stores, just get stores in to pay the upkeep/taxes, just enough security to keep it from being a homeless needle alley or a gang hangout. (I’d do a sign, “Gangs not welcome, Tongs are”) Make sure a few bookstores, possibly an arcade.
Partition the main area to be a lot of comfy public benches, seats, semi-private booths. A variety. Some maintained bins of public reading books, zines, copybooks, etc.
Maybe -if public demand- have a kid’s section, but this is off to a corner – though a protected corner so the kids don’t make disruption but again Chester M. can’t casually run in with a burlap sack and grab a few of the rotten brats.

A place like this – especially in a now diminished area between other stores and on routes where people drive to and from work – would be a great place to stop for a while for lunch – to sit and read – to shop casually. And to socialize. On weekends, perhaps some weeknights could be live storytelling, plays, sometimes community meetings. I’d anticipate resistance at first from the large corporate business leaders if they noticed, but if it got established they’d all start making more comfy public areas. “Smithers, HOW is that under-staffed blight turning a slight profit from rents while I shovel more money than I earn into a dozen malls…?”

GreenGestalt,
Help may be on the way… I read recently (perhaps even here on black gate?) that B&N is considering a pilot program to serve beer and wine in their stores. I think having a beer in a setting that’s not loud and aggressive would be a great way to get closer to what you’re describing.
Presumably there’s fewer kids at 8 pm and after playing with the toys. A moderate amount of social lubricant + books = a good social scene, at least to me.
But I’m also fantasizing about your idea in a nearby abandoned K-mart that cannot seem to find a tenant…
Mick.

GreenGestalt and Mick Gall: some great ideas here. I find that the Spanish tradition of sharing small plates of food while standing/sitting around in bars really promotes a social atmosphere, with a lot of communication and exchange of ideas.
There’s an empty Target store not far from me . . . .

I bought my first Kindle about 7 years ago, initially because I’d just moved and not only was moving all my books a huge pain, but I really didn’t have enough bookshelves, and Kindle books were still relatively cheaper.
Then soon I realized since I moved I now had at least a 25 mile trip to the closest bookstore -a box one.
Here in the last couple years I’ve started missing physical books but bookstores are even more scarce. And forget about independent or used-book sellers.