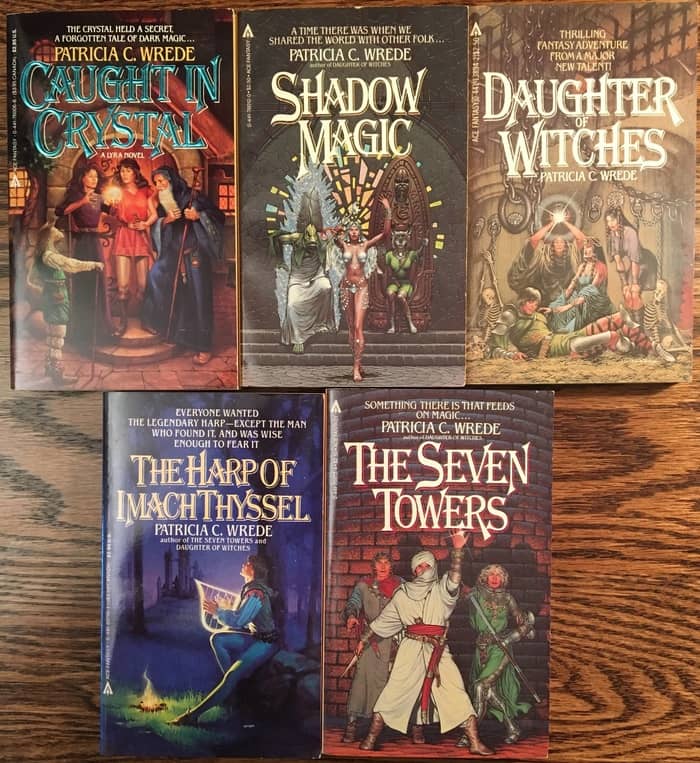 On Thursday I was carefully stacking books in the vast subterranean treasure vault known locally as the Cave of Wonders (and which my wife calls, much more prosaically, our basement), when I found something unusual: a stack of unopened boxes. That’s a mystery worth investigating. I carted them back through winding tunnels and secret passageways until I reached our library, and pried them open with a crow bar.

Wonder of wonders! They were packed with vintage paperback and strange magazines. It’s like Christmas!

They were doubtless eBay booty that got hastily stashed in the basement because company was coming over five years ago, or something similar. Who knows. I have no recollection of them, so it’s like getting a surprise package from my former self. And, man. What great taste that guy has! There was an odd assortment of magic magazines from the early 1970s (chiefly The Linking Ring, which is packed with the most fabulous ads for trick cards, books, and neato magic books), a set of DAW volumes by Neal Barrett, Jr., and the collection of 80s Ace paperbacks by Patricia C. Wrede pictured above.

That latter set was the most interesting, and I spend some time with it this morning. It’s a nearly complete set of Lyra novels (all those published by Ace, anyway), plus The Seven Towers, a standalone novel from 1984.

I chiefly know Wrede from her highly regarded YA work — including the Enchanted Forest Chronicles and the Cecelia and Kate trilogy, co-written with Caroline Stevermer — so I was surprised to see she had authored so many adult fantasies. That’s probably exactly what was going through my mind when I found this set on eBay.

I was really delighted to discover these books, and not just because of the opportunity to read adult Wrede. Looking at the set above, it takes me right back to the mid-80s, when Ace was perhaps the most reliable supplier of quality paperback SF and fantasy on the market. H. Beam Piper, Fred Saberhagen, Gordon R. Dickson, Poul Anderson, and countless others were published by Ace in those years. I missed these books then, but this is my chance to correct that oversight.

Here’s the back covers. 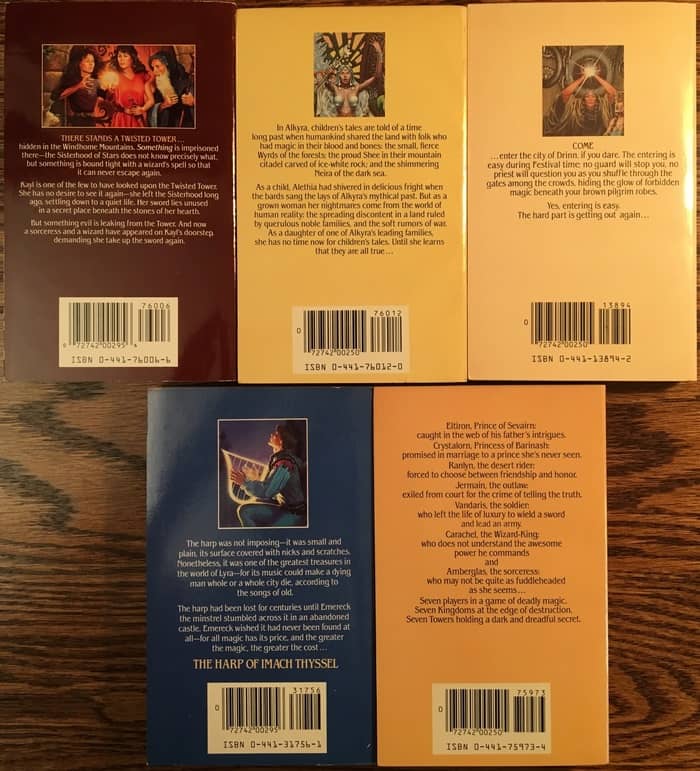 The first four books in the set above are part of the Lyra sequence, named after the world the books are set on. A fifth volume, The Raven Ring, was published by Tor nearly a decade later. The books are all standalone and can be enjoyed in any order, however.

The last book in the set is The Seven Towers, a standalone fantasy:

The cover artist, Walter Velez, was so strongly linked with Thieves World in my mind that I probably thought this was a Thieves World novel the first few times I saw it.

A Review of Mairelon the Magician, by Isabel Pelech
Fantasy Clichés Done Right: Mary Moore on The Enchanted Forest Chronicles by Garrett Calcaterra
The difficulty of SF vis-a-vis F by Theo

I seem to recall reading that Patricia C. Wrede was involved in launching an even more important career in the mid-80’s: she helped Lois McMaster Bujold get her start.

Walter Velez and the Thieves’ World series – yes! Of course, with the TW books being published by Ace, a certain similarity of design, cover typeface, style of illustration, etc., is inevitable.

And a gush over The Linking Ring, which makes me think you a member of IBM. If you were a member of SAM, then M-U-M would be the word. And I admit to being in neither, but a good friend was a pro and in both.

Yeah, I saw that cover and knew it had to be the same artist as Thieves World.

I remember seeing some of these on bookstore shelves, but I don’t know if I’ve read any of her books. I know here from rec.arts.sf.composition, where she was active for many years and had useful things to say about writing and the industry.

> Patricia C. Wrede was involved in launching an even more important career in the mid-80’s: she helped Lois McMaster Bujold get her start.

I didn’t know that! Hoe did she accomplish that?

> And a gush over The Linking Ring, which makes me think you a member of IBM. If you were a member of SAM, then
> M-U-M would be the word. And I admit to being in neither, but a good friend was a pro and in both.

Sadly, this encounter with The Linking Ring is my first. and I’m not familiar with IBM or SAM.

I was a devoted reader of The Magic Magazine as a pre-teen, however. It was the first magazine I collected, and I loved it dearly.

> I know her from rec.arts.sf.composition, where she was active for many years and
> had useful things to say about writing and the industry.

You’re not the first person to bring up rec.arts.sf.composition! It’s legendary among internet old-timers like myself. There are many great things about the fast evolution of the net, but the death of those old boards is not one of them.

From what I recall in an essay in one of the early Writers of the Future anthologies, she helped Bujold with revisions on at least one of her early novels and strongly encouraged her to continue writing at a time when she was just about ready to give up.

She (Patricia Wrede) lives (still, I think?) in Minneapolis and back in the 1980s she was also part of a group of local writers that included Steven Brust and Emma Bull and Pamela Dean and probably others I’m forgetting and will be embarrassed to be reminded of.

> There are many great things about the fast evolution of the net,
> but the death of those old boards is not one of them.

ras.composition remained viable a lot longer than most. The bad sort that showed up were surprisingly responsive to collective shaming. I never understood why, but there you go.