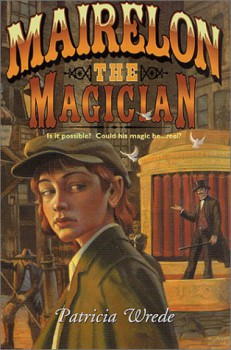 Mairelon the Magician is a little bit mystery, a little bit comedy, but mostly a mixture of alternate history and fantasy.  It’s a light, fun sort of book; no world-altering plots or pitched battles, but a fair amount of sneaking around, spying, and working out who’s plotting what against whom.  (It’s not much of a spoiler to say that the majority of the incidental characters are plotting something.)

I think it works better in concert with its sequel, Magician’s Ward, which adds a bit of romance to the already eclectic mix, but the first book is enjoyable on its own.

I really have only two reservations.  First, I found the pacing of the climax to be slightly off, although this may be because I was looking at it with the wrong set of genre lenses; it may fit better into mystery than fantasy.

The second reservation is more of a warning than a complaint: if you’re American, do not watch British shows or movies, and know you have a hard time with dialect, avoid this book — or at least hunt down a period drama to watch first, just to get into the rhythm of the language.  Otherwise the amount of thieves’ cant will make the story nearly unintelligible. 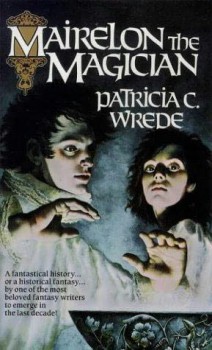 Despite the title, the protagonist of the book is Kim, a sixteen year old street thief with a dire secret: she’s a girl.  In nineteenth century London, as she knows perfectly well, she’s probably destined for a short life of prostitution if she can’t find some way to improve her lot.

So when a stranger offers her five pounds to break into a performing magician’s wagon and tell him what’s inside, she takes his money without asking too many questions.

She would never have done it if she had realized the magician in question was a real magician and not a stage performer, but by that time it’s already too late.

Mairelon — more properly known as Richard Merrill — is not only hiding in plain sight by pretending to be a fake magician.  He’s involved in a tangled plot involving multiple magical artifacts, all stolen from the Royal College of Wizards in a way that implicated him.

Mairelon is a dangerous man, in a quiet sort of way; not only is he a member of the gentry, a wizard, and quite intelligent, he spent a few years as a spy in France. 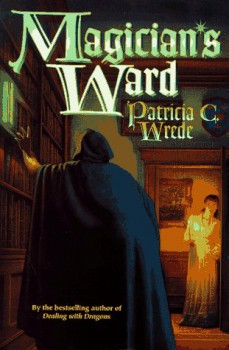 Luckily for Kim, who he catches searching his wagon, he’s also unconventional, curious, and a bit of a soft touch when it comes to people in trouble.  He decides to bring Kim along on his search.

Kim is dubious about this, but she has reasons of her own to leave London — and besides, Mairelon offers her a variety of lessons, including reading and proper speech.  Mairelon’s servant, Hunch, is even more dubious about the whole thing, but Mairelon has made an art form of getting around Hunch.

What follows is a plot full of sneaking, spying, counterfeiting, breaking, entering, and getting out again without getting caught.  There are few jokes but a fair amount of dry comedy, particularly in the scene where a good half of the cast attempts to burgle the same library at the same time.

Mairelon is an interesting mixture of rogue and gentleman, mildly correcting Kim’s grammar one moment and climbing through other peoples’ windows the next.

There were times when I felt tempted to get out a piece of paper and write down which bit players were associated with whom, and how.  There are more than a few of them, and it gets quite complicated. 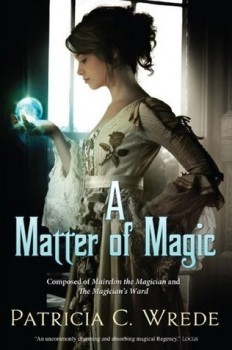 It does all come together by the end, although there’s a somewhat lengthy “drawing room scene” sort of monologue that helps tie everything together; a bit disconcerting if you were expecting a climax that involved more pitched magical battle.

Both Mairelon the Magician and Magician’s Ward were assembled into a single-volume omnibus edition called A Matter of Magic, published last year by Orb Books.

Perhaps the best measure of whether you’d like this book is how much you like intelligent, roguish, and sneaky heroes and heroines.  I’d recommend it to fans of Lois McMaster Bujold’s Vorkosigan Saga, for instance, or Dianna Wynne Jones’s Chrestomanci books.

In some ways, this is a period mystery story with some magic involved rather than a fantasy with mystery.  But that’s not necessarily a bad thing, and if you like historicals and fantasy, it’s definitely worth checking out.