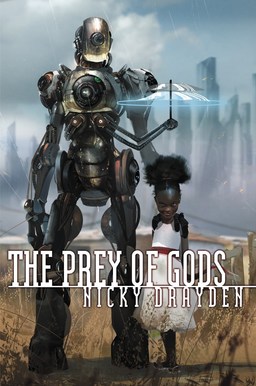 There aren’t enough good robot adventure stories out there. At least Nicky Drayden is doing her part… her debut novel The Prey of Gods, featuring robots, genetic engineering, a Zulu heroine, and an ancient and bloodthirstily demigoddess, arrives in trade paperback from Harper next month. Drayden has published more than a dozen short stories in Daily Science Fiction, as well as Shimmer, Space and Time, Andromeda Spaceways Inflight Magazine, and other fine venues. Publishers Weekly calls her novel “A science fantasy set in 2064, [where] newly awakened demigods and artificial intelligences battle for the fate of South Africa… fascinating.”

In South Africa, the future looks promising. Personal robots are making life easier for the working class. The government is harnessing renewable energy to provide infrastructure for the poor. And in the bustling coastal town of Port Elizabeth, the economy is booming thanks to the genetic engineering industry which has found a welcome home there. Yes — the days to come are looking very good for South Africans. That is, if they can survive the present challenges:

And an ancient demigoddess hellbent on regaining her former status by preying on the blood and sweat (but mostly blood) of every human she encounters.

It’s up to a young Zulu girl powerful enough to destroy her entire township, a queer teen plagued with the ability to control minds, a pop diva with serious daddy issues, and a politician with even more serious mommy issues to band together to ensure there’s a future left to worry about.

Fun and fantastic, Nicky Drayden takes her brilliance as a short story writer and weaves together an elaborate tale that will capture your heart . . . even as one particular demigoddess threatens to rip it out.

The Prey of Gods will be published by Harper Voyager on June 13, 2017. It is 400 pages, priced at $15.99 in trade paperback and $10.99 for the digital edition. The dynamite cover is by Brenoch Adams. Read a generous excerpt at Tor.com.