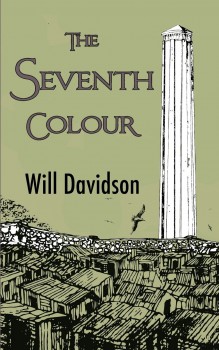 The Seventh Colour by Will Davidson is the tale of a society in stagnation. A thousand years ago, the elves departed, and the dwarves’ slow decline led to their eventual extinction, leaving the humans alone in the world. But magic faded with the elves, and the humans were never able to match the dwarves’ technical ingenuity, so all they had were the technology and social structures left by their departed allies. And whether they worked for the dwarves and the elves or not, human society is dying trying to cling to those things.

The story is told in multiple ways. The first, and most straightforward, is the view of Tomas, an investigator in Rivertop looking into the disappearance of a number of individuals whom his boss, Victor, believes were involved in an incident that injured Victor and killed his wife. Interspersed with Tomas’s perspective is the redacted confession of subject T187356, who recounts his harrowing encounters with highwaymen and orks and the criminal rebellion that his aunt and uncles are involved with. These converge when Tomas meets the vanished individuals, and we recognize the interrogated subject as one Alyster Trale. He and his sister, Elyssa, are currently under the protection of their parents’ friends. Far from arresting his suspects, Tomas joins them on their journey to find someplace safe for Alyster and Elyssa, and he hears them out as they travel.

Merson, Forba, Rauor, Lias, Lariad, and Pepina were all good friends at University, and like many University students, they held many long discussions about the ills of the world, and what could be done about them. They hit upon the idea that they should seek out the vanished elves, and went about learning what they could of them. Much of the novel is their account to Tomas of their quest, twenty years before this new journey he’s joined them on.

One would think, from all these different story-telling approaches, that the result would be a confused mess. But while it doesn’t always cohere perfectly, the result is truly compelling. The Seventh Colour is essentially a heist story, with conspiracies and betrayals and unreliable narrators telling just enough to keep the reader guessing at the next revelation, at what’s true and what’s not. At the bottom, the most important fact, the one which the readers have known since the prologue but Tomas only learns near the end, is that the elves are not the good guys. They were occupiers, imperialists still worshipped by the subjects they abused. And while humanity is stagnating without them, their return may be even worse.

The characters in The Seventh Colour speak in a stiff and formal style. It takes a while to get used to, but it does reflect their society, where almost all conduct is governed by the Council of Style, a harmless-sounding organization that decides what opinions may be voiced, or even held, by the best in society. So making the language reflect the society works for the novel. Still, some may find the dialogue off-putting, especially considering that long sections of the narrative are told in that voice. It does not help that there are formatting inconsistencies, with unexpected page breaks and non-standard punctuation of multi-paragraph dialogue. [Update: The author informs me that the page break issue has been fixed in the version of the ebook currently available, and does not appear in the paperback.] Self-published books are rarely as polished as professional layout artists and copy editors could make them, but the issues were noticeable enough to warrant comment.

In addition, the novel veers toward preachiness at times, especially in the way it presents the hard-hearted elves’ anti-regulatory faith in the Markt as a sort of parody of capitalism. Nor is that the only way that the society presented in the novel doesn’t feel real, as if it exists mainly to show various ills. I would have preferred a society that felt more organic, with all the contradictions and inconsistencies of real societies.

When I finished the book, I was still left with one outstanding question. Given that the conspirators learned that the elves were not to be trusted, why did they seek them out, what did they hope to gain? Why risk giving them an invitation to return? It seems to me that it would have been easier, and far less dangerous, for them to seek out some other path to recovery. If it is largely the elves’ philosophy that has held humanity back, it hardly seems wise to seek more from them. There’s a hint that the conspirators have a plan, something that they were only able to achieve by finding the elves, but what it is will have to wait for the sequel.

The Seventh Colour is available from Amazon for $2.99 for the ebook, and $13.99 for the paperback.