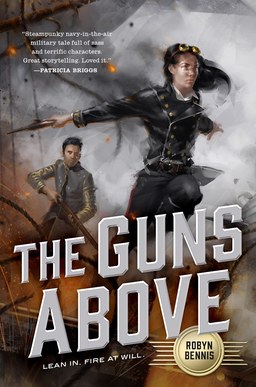 Robyn Bennis’s debut novel The Guns Above, a steampunk military fantasy about a female airship captain, arrives in hardcover from Tor in two weeks. The book sounds interesting enough, but it’s Bennis’s riff on the cover at Tor.com that really got my attention.

Why do I love this cover so much? Let me direct your attention first to the badass lady jumping over a gondola rail with pistol in hand. That’s Josette, Garnia’s newest airship captain… let’s be honest, when a woman sees a job that needs doing, her first instinct is always to roll up her sleeves and do it herself. And sometimes that means leaping from your airship with pistol in hand. Back me up here, ladies.

They say it’s not the fall that kills you.

For Josette Dupre, the Corps’ first female airship captain, it might just be a bullet in the back.

On top of patrolling the front lines, she must also contend with a crew who doubts her expertise, a new airship that is an untested deathtrap, and the foppish aristocrat Lord Bernat, a gambler and shameless flirt with the military know-how of a thimble. Bernat’s own secret assignment is to catalog her every moment of weakness and indecision.

So when the enemy makes an unprecedented move that could turn the tide of the war, can Josette deal with Bernat, rally her crew, and survive long enough to prove herself?

The Guns Above will be published by Tor Books on May 2, 2017. It is 352 pages, priced at $25.99 in hardcover and $12.99 for the digital edition. The cover is by Tommy Arnold, whose done several recent covers for Tor.com, including Kai Ashante Wilson’s A Taste of Honey, David Dalglish’s Fireborn, and Corey J. White’s upcoming Killing Gravity.

John, sometimes I think I should just send you my address and bank information and wait for the cool books to flow in. Really. It’s starting to seem as if every time I open BLACK GATE (which is every day) my wallet squeaks. Still, not a bad problem to have.

Yep, I can back her up, though I really hope I never have to take my acrophobia out for a spin like that.

RK — Glad to be of service! My New Treasures posts are intended to highlight the best of the review copies that cross my desk. So really, they’re a celebration of those things I WISH I could be reading, instead of formatting and editing three blog posts a day.

So I envy you, who have time to read an enjoy so many of them. Let us know what you think!

If you were part of my airship crew, I’d fully expect you to be the first over the rail with a pistol in hand, acrophobia or not!