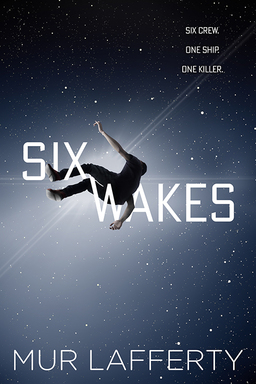 Mur Lafferty’s latest novel is a space adventure set on a lone ship where the clones of a murdered crew must find their murderer — before they kill again. (On her blog Mur writes, “Clone Murder Mystery in SPACE was a rejected title. Another rejected title was from my friend Alasdair: Murder Space Clone Bastard.”)

James Patrick Kelly writes “This is one of the cleverest and most exciting murder mysteries I have ever read. The confined space of the colony ship Dormire is filled with feisty and memorably strange characters… Lafferty does for clones what Asimov did for robots.” The novel arrives in trade paperback by Orbit at the end of the month.

It was not common to awaken in a cloning vat streaked with drying blood.

At least, Maria Arena had never experienced it. She had no memory of how she died. That was also new; before, when she had awakened as a new clone, her first memory was of how she died.

Maria’s vat was in the front of six vats, each one holding the clone of a crew member of the starship Dormire, each clone waiting for its previous incarnation to die so it could awaken. And Maria wasn’t the only one to die recently…

Mur Lafferty’s most recent series was The Shambling Guide to New York City; she’s also a contributor to the Book Burners serial from Serial Box. She won the 2015 Manly Wade Wellman Award for her novel Ghost Train to New Orleans. Our recent coverage of her includes Mur Lafferty on Reading the Classics.