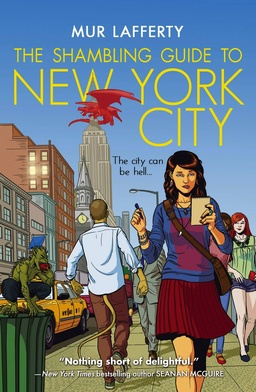 Mur Lafferty is something of a renaissance woman. She was the host and co-editor of the horror podcast Pseudopod until July 2007; in 2010 she became the editor and host of the weekly SF podcast magazine Escape Pod. She’s also the host of I Should be Writing (when does she find time to actually write?), and a winner of the Podcast Peer Award and the Parsec Award.

Apparently, she must make time somehow. She’s the author of two previous novels (Playing for Keeps, and Nanovor: Hacked), and her third novel is out from Orbit Books. Zoe Norris is a travel writer forced to take a job with a shady publishing company in New York, only to discover she’s been tasked with writing a tour guide for the undead. Scott Sigler said of The Shambling Guide to New York City, “If Buffy grew up… moved to New York and got a real job, it would look a lot like this.” Sounds plenty intriguing to me.

Because of the disaster that was her last job, Zoe is searching for a fresh start as a travel book editor in the tourist-centric New York City. After stumbling across a seemingly perfect position though, Zoe is blocked at every turn because of the one thing she can’t take off her resume — human.

Not to be put off by anything — especially not her blood drinking boss or death goddess coworker — Zoe delves deep into the monster world. But her job turns deadly when the careful balance between human and monsters starts to crumble — with Zoe right in the middle.

The Shambling Guide to New York City was published by Orbit Books on May 28, 2013. It is 358 pages, priced at $15 in trade paperback and $9.99 for the digital edition. The marvelous cover is by Jamie McKelvie (click for a full-size version).