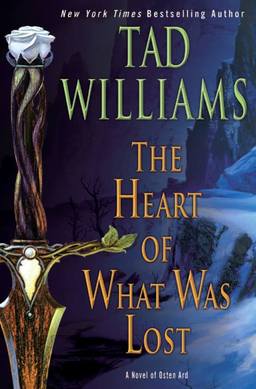 Tad Williams’ massive Memory, Sorrow, and Thorn trilogy (The Dragonbone Chair, Stone of Farewell, and the 1,100-page To Green Angel Tower) was one of the biggest fantasy series of the late 80s and early 90s. Set in the world of Osten Ard, the books were enormously influential on an entire generation of fantasy writers. Patrick Rothfuss called it “Groundbreaking… changed how people thought of the genre, and paved the way for so much modern fantasy. Including mine,” and George R. R. Martin said it “Inspired me to write my own seven-book trilogy…. It’s one of my favorite fantasy series.”

Tad Williams returns to Osten Ard for the first time in over two decades with The Heart of What Was Lost. It arrives in hardcover next month from DAW, and will be followed by The Witchwood Crown (the opening novel in a brand new series, Last King of Osten Ard) in April 4, 2017.

At the end of Memory, Sorrow, and Thorn, Ineluki the Storm King, an undead spirit of horrifying, demonic power, came within moments of stopping Time itself and obliterating humankind. He was defeated by a coalition of mortal men and women joined by his own deathless descendants, the Sithi.

In the wake of the Storm King’s fall, Ineluki’s loyal minions, the Norns, dark cousins to the Sithi, choose to flee the lands of men and retreat north to Nakkiga, their ancient citadel within the hollow heart of the mountain called Stormspike. But as the defeated Norns make their way to this last haven, the mortal Rimmersman Duke Isgrimnur leads an army in pursuit, determined to end the Norns’ attacks and defeat their ageless Queen Utuk’ku for all time.

Two southern soldiers, Porto and Endri, joined the mortal army to help achieve this ambitious goal — though as they venture farther and farther into the frozen north, braving the fierce resistance and deadly magics of the retreating Norns, they cannot help but wonder what they are doing so very far from home. Meanwhile, the Norns must now confront the prospect of extinction at the hands of Isgrimnur and his mortal army.

Viyeki, a leader of the Norns’ military engineers, the Order of Builders, desperately seeks a way to help his people reach their mountain — and then stave off the destruction of their race. For the two armies will finally clash in a battle to be remembered as the Siege of Nakkiga; a battle so strange and deadly, so wracked with dark enchantment, that it threatens to destroy not just one side but quite possibly all.

Trapped inside the mountain as the mortals batter at Nakkiga’s gates, Viyeki the Builder will discover disturbing secrets about his own people, mysteries both present and past, represented by the priceless gem known as The Heart of What Was Lost.

Demons, Angels, Monsters and Mysteries: A Review of The Dirty Streets of Heaven by Jeremy Erman
November Brings the Final Volume of Tad Williams’ Shadowmarch Series

I loved The Dragonbone Chair and then liked each succeeding book less. I barely got through the last, probably just because the story didn’t go the direction I’d hoped. My problem, I guess. Still this builds on the previous plot lines and I’ll skip.

George R. R. Martin said it “Inspired me to write my own seven-book trilogy…. It’s one of my favorite fantasy series.”

Now I know who to blame!

LOL! In a similar, sardonic vein, how many “fantasy forests” were clear-cut to print these tomes???

I still have my SFBC hardcovers of the original trilogy, which I last read in, oh, probably 1993 or thereabouts. I do remember liking them; I think Williams has always had a good way with elves (not slavishly copying Tolkien, but making them decidedly unhuman).

Might be time for a reread when the new one comes out.

I’ve never read Williams, though I’ve heard he’s a fine fantasist. But why is it that with this kind of book, any summary invariably makes the whole thing sound like a parody?

> I loved The Dragonbone Chair and then liked each succeeding book less. I barely got through the last…

I have to admit I didn’t make it all the way through THE DRAGONBONE CHAIR. It just moved too slow for me. I got to the part where Simon flees through the secret passage under the castle, and puts his arm in a nest of blind spiders. That part was cool, but it just took too long to get there.

I DO love that line, “my own seven-book trilogy…” 🙂

> Might be time for a reread when the new one comes out.

It’s not completely clear, but I don’t think The Heart of What Was Lost is actually part of the new trilogy, Last King of Osten Ard. It’s suspiciously short, for one thing. It may be a “bridge” book.

It’s being described as a “Perfect beginning for new readers!” so I suspect it may function as as easy on-ramp for the new series.

> But why is it that with this kind of book, any summary invariably makes the whole thing sound like a parody?

I know what you mean. Epic fantasy is tough… readers expect it to follow a very strict, tolkienesque formula. Hugely ambitious, high stakes, big cast, and a dark lord. Deviate too much in your description, and you lose their interest.

John/Thomas — Yep, just reading back-of-book copy can make even the best epic fantasy sound like a write-up of someone’s D&D campaign; that’s why I like to check reviews.

And yeah, I was wondering if this book was going to be something more interstitial rather than the start of the actual trilogy. Either way, it’s probably a good excuse.

(And because I’m entirely incapable of helping myself — it hasn’t _quite_ been 20 years — Williams had a Memory, Sorrow & Thorn story in the first Silverberg Legends volume back in, what, 1998?)

Or Lord of the Rings. Or Harry Potter. Or….