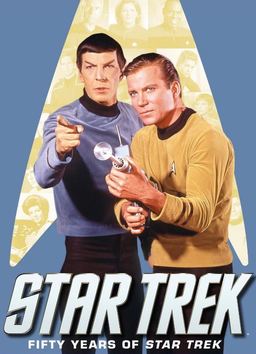 I’ve been celebrating the 50th Anniversary of Star Trek in my own way. Meaning I’ve been giving in to impulse buys, and snatching up those commemorative photo-books and magazines when I see them. Yeah, they’re sometimes a little lacking in depth, but it doesn’t matter. I buy them mostly for the marvelously nostalgic photos, for the way they manage to make Star Trek — one of our most venerable franchises — young again.

Titan Comics has been publishing the official Star Trek magazine since 1995, and they collected collected some of the best articles from that magazine in The Best of Star Trek: Volume 1 – The Movies (June 2016). This is the second volume in that set, covering the various broadcast series. It will be available at the end of the month.

The 50-year history of Star Trek, as told by the people who were there – every cast member interviewed.

From the vaults of Star Trek Magazine, we celebrate a half-century of Star Trek in a volume packed with classic archive interviews with every lead cast member, from William Shatner to Patrick Stewart, to Chris Pine and beyond. Featuring every incarnation of world’s favorite sci-fi saga, including the stars of the original series, The Next Generation, Deep Space Nine, Voyager, Enterprise, and the Trek movies, familiar faces reveal the true story behind the greatest moments in the fifty-year history of Star Trek.