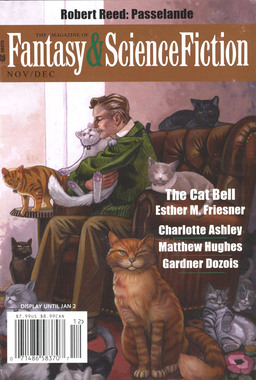 There’s a great mix of new and established writers in the latest F&SF, including masters such as Robert Reed, Gardner Dozois, Esther M. Friesner, and Matthew Hughes, and newcomers like Lilliam Rivera, Minsoo Kang, and James Beaumon. Tangent Online‘s Bob Blough has particular praise for Esther Friesner and Robert Reed in his online review.

Esther M. Friesner starts it off with a fairy tale based on Puss n’ Boots called “The Cat Bell.” This concerns a famous actor at the end of the nineteenth century and his love of cats. It is told from the viewpoint of his pinched, mean cook who is in love with her master. She hates cats and hates having to feed them every night—all 19 of them. Each cat has a bell around its neck. But the cat bell is what the cook uses to gather the cats for a meal. Inevitably Puss n’ Boots shows up and works his inevitable charm on the household. The cook receives her heart’s desire in a way that gives her just desserts as well. Fun and a well-rounded main character make this most enjoyable…

Robert Reed writes a lot of short stories. Most of them of very high quality, but in “Passelande” he has outdone himself. This is a sneaky story concerning Lucas Pepper. Lucas lives in a time just years ahead of ours in which the world is falling apart outside the town of Passelande. The plot is complicated and concerns identity as people have backups who, if given a body, are almost as real as the progenitors themselves.

I read it twice. I thought it was excellent on the first read but the second solidified it as absolutely first rate. It has all the echoes of great Gene Wolfe stories but remains completely Reed’s.

The cover is by Kristin Kest. Here’s the complete Table of Contents.

This issue is on sale until January 2. We last covered F&SF with the September/October issue.