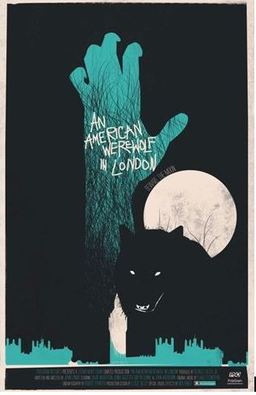 It’s the 1981 Academy Awards ceremony and creature-effect magician Richard (“Rick”) Baker is stepping on stage to receive not only the first of what would be his total of seven awards to date (out of 11 nominations), but the first ever handed out for Best Makeup. The award was newly minted that year in response to the lack of an award in 1980 with which to celebrate the incredible makeup effects of The Elephant Man.

Though Baker was already known in Hollywood for his work in The Exorcist, King Kong and The Fury, and would go on to win Academy Awards for Ed Wood and Men in Black among others, his first award for his achievements in An American Werewolf in London would forever be ground-breaking on multiple levels.

Among the vast catalog of werewolf films there are, of course, many standouts – not the least of which is Universal’s 1941 classic The Wolf Man, which introduced the werewolf concept to the then new medium of film. But we’d also need to count Joe Dante’s The Howling and the teenage coming-of-age horror flick Ginger Snaps. In fact, ilovewerewolves.com tallies over 150 werewolf movies made to date; but An American Werewolf in London tops their list.

Starring David Naughton as a young American traveler who is cursed to become a murderous beast when the moon is full after an unfortunate encounter on the British moors, and Griffin Dunne as his dead friend Jack, An American Werewolf in London is generally regarded as not only one of the greatest werewolf movies ever, showcasing what was then the most ingenious special effects, but one of the greatest horror films of all-time.

David and Jack, two American college students, are backpacking through Britain when a large wolf attacks them. David survives with a bite, but Jack is brutally killed.

As David heals in the hospital, he’s plagued by violent nightmares of his mutilated friend, who warns David that he is becoming a werewolf. When David discovers the horrible truth, he contemplates committing suicide before the next full moon causes him to transform from man to murderous beast.

Basically what I’m saying here is that if you haven’t seen it, go do so immediately. 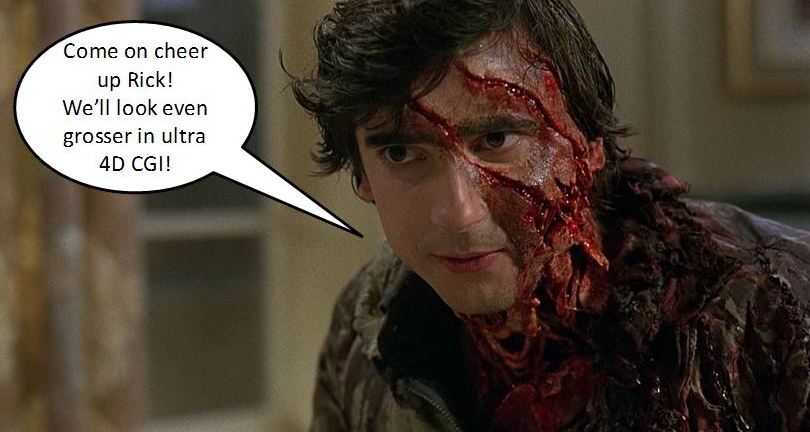 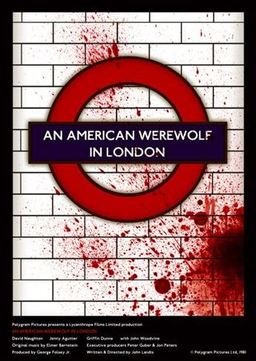 The rest of us will stay here and contemplate how to react over this new bit of news.

According to Deadline, Walking Dead creator Robert Kirkman’s production company Skybound Entertainment is officially prepping a remake of AAWIL, in conjunction with original distributor Universal Pictures (do we see a pattern here?).  John Landis is on-board as an executive producer of the remake, which makes sense since AAWIL is arguably his magnum opus.  Even more interestingly though, Landis’ son Max (Chronicle, Victor Frankenstein) is set to write and direct the project, in what just might be the first case of a son remaking his father’s film.

Its early days so it’s yet unknown just how closely Max Landis will stick to the story his Dad penned.  Still with these credentials it is already on track to be better than the travesty that was the 1997 sequel An American Werewolf in Paris, which featured some of the worst CGI werewolves to ever grace the silver screen.

And what about Mr. Baker?

His special effects have come a long way since AAWIL and Michael Jackson’s video Thriller (see Malficent and Tron: Legacy as examples). But in spite of my excellent cyber-stalking skills, I was unable to uncover even a wiff of Baker’s involvement in this new venture.

However, as it appears we’re getting the band back together on this one… stay tuned.

Have a comment (and I know you do)?  Post it here or drop a line to sue@blackgate.com.

With Max Landis, who is wrecking Douglas Adams’ Dirk Gently as I type this comment, in charge, I would expect a train wreck of a remake. Keep expectations low.

I don’t know quite why, but I’ve never warmed to this movie. If I have to have a horror comedy, I’ll take The Fearless Vampire Killers any day.

I just saw the original for the first time on Halloween. I haven’t enjoyed a movie that much in a while. I realized while watching it that the Slaughtered Lamb scenes were filmed in an area of Wales where I once took a walking tour. Creepy!

Eighties movies have a sharp comic bite and penchant for the bizarre that never seem to carry over into remakes & reboots (with the exception of Mad Max: Fury Road, of course). Can you imagine a crazy dream sequence of Nazi werewolves blowing people away being made today?

To be fair, the genius of Douglas Adams is a very elusive thing to capture on film under the best of circumstances. The problem is that any modern rendition is just too…well…slick looking. Add to it the fact that almost any director is going to try to interpret Adams’ material and that just means everything (and I do mean everything) is hopelessly lost in translation.

So, Dirk Gently aside, I have a feeling dear old Dad isn’t going to let junior hose up his signature film. At least one would hope.

TPark: Fearless Vampire Killers would be incredibly awesome if I could just get past the whole Sharon Tate, Roman Polanski thing…

Raph, I agree with you completely. There’s something disquieting (in a wonderful way) about not knowing whether I should be screaming or laughing – and the 80’s did that very well.

And…some years back I found a replica pub sign at the flea market for The Slaughtered Lamb. It has place of pride in my home office to this day. AWWIL will always be one of my very favs.

Sue – I get what you’re saying. But…
(you knew that was coming)

I wasn’t all that inspired with The Hitchchiker’s movie once it FINALLY got made, but I thought it was decent and I recognized it as Adams’ book.

Three episodes into Dirk Gently, if it wasn’t for the name and the occasional references to holistic stuff, you’d have no basis for thinking, “Oh, man, this is that Dirk Gently detective that Douglas Adams wrote about. I should check this out.”

Since neither BBC series was based on the actual books, it just relates to the character. And that first BBC series with Stephen Magnon was identifiable as Dirk Gently. Overall quality is up to the viewer, but the new DG doesn’t give the viewer anything.

I hope the new movie has some bearing on John’s original.

With regard to father-son…it wasn’t a remake, but there was a re-release of ERIK THE VIKING on DVD which flaunted the fact that it was reedited by director Terry Jones’ son. Since there was no actual unused footage available to add to the film, this version consisted of subtracting footage (including my favorite visual gag from the original). I would say it did not turn out well.

Interesting. I’m not a Max Landis fan but I’ll give this a shot and see how it turns out. I loved the original and didn’t mind too much AWWiP (it wasn’t good but I have seen worse). I do hope that the son stays true to the vision of the father on this one. The original was excellent.

As far as Dirk Gently goes, I’m torn because I would prefer that they not try to turn the works of Douglas Adams into film/TV. I’m not even willing to watch the latest attempt but I did watch the Stephen Magon series and didn’t completely hate it.

Patrick – I liked the Magnon series more than you did, but it was ‘meh’ at best. I do completely hate the new one. And it only had to be as good as the mediocre Magnon version to work for me…