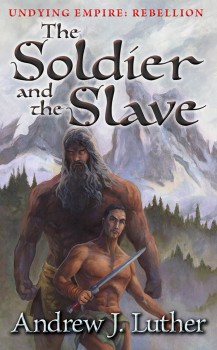 In The Severed Oath, the Emperor played only a small part. He wasn’t very helpful, but neither was he particularly malevolent. The Emperor does not appear in The Soldier and the Slave, but he has a much more sinister role. He has ordered a detachment of his legions, led by Commander Kied, to secure a valley while a small team of specialists search for something hidden in it. The valley is inhabited by farmers, unimportant but citizens of the Empire. While Kied is initially content to follow orders, even if it involves confining Imperial citizens to their homes, he balks when he discovers what’s planned for the second part of his orders: the wholesale execution of the citizenry. His refusal, while noble, leads only to his arrest and imprisonment, and the execution of his command staff.

Reduced to a slave in the mines, he is paired up with Rotos. A giant of a man, Rotos is not only strong, but powerful, possessing abilities unlike any that Kied has seen. He can overwhelm most people with sheer presence, though Kied proves at least partially resistant. Rotos is also unfriendly, unwilling to even talk to Kied at first.

While Kied is trying to survive the mines, his fellow commander and former lover Laita has been assigned to take over Kied’s command. This time, the ambassador in charge of the mission has been careful to keep the details of the second part of the mission from her, in the hope that she won’t have time to second guess her orders the way Kied did.

Meanwhile, once Rotos and Kied finally start to bond, Kied tells him what he knows about the prize the Emperor is hunting for. It’s at that point that Rotos decides that it’s time to leave. He knows exactly what the prize is, and he is determined to stop the Emperor. Kied’s faith in the Emperor died with his command staff, so he is happy to help.

The Soldier and the Slave was an enjoyable read. There were deep mysteries at work, and I was pulled along by my curiosity about who Rotos was, and what prize they were racing toward. I liked Kied as a character, even knowing that, despite his reluctance to kill Imperial citizens, he probably would still be considered a war criminal in our day and age for what he’d done in other campaigns. There was a lot of action, both physical as Rotos and Kied escape and evade capture, and political as Laita tries to outsmart the Emperor’s ambassador. All of it was well-told and entertaining.

The world of the Undying Empire has a Lovecraftian edge. The deities, both old and new, drive their worshippers mad, when they don’t simply consume them. Magic has a wrongness to it, jarring at the ears and minds of the practitioners, and sometimes causing them to vomit black bile. And true knowledge is dangerous, leading to madness, despair, and even worse, being noticed by the mad gods outside of time and space.

While a lot of the book worked, I often felt that Kied did not have enough agency. For most of the book, he ends up following Rotos around, relying on the big man’s strength and other abilities to get him out of trouble. I would have liked to see him get a win or two of his own in before the end. Even in the finale, he barely manages to earn his co-starring role.

Additionally, there are a few places where the plot doesn’t really make sense. For example, while the Emperor has good reason to keep his prize secret, it’s unclear why he has to kill all the farmers in the valley to do so. The cave is well-hidden–it’s magically protected so it cannot be found unless someone knows to look for it. And since the farmers don’t know about it, why should they need to be killed? The only thing that might give its location away is the fact that there’s an army there to secure it, but its magical protection would have kept it perfectly secure if the army wasn’t there in the first place. So why not just send the specialist team, who seem quite capable of avoiding the farmers? And even if securing the valley is necessary, why put an ambassador in charge? His skills aren’t exactly necessary for what is essentially a police action. It’s implied that the Legion’s High Command approves of the orders. Why not send one of the Emperor’s trusted generals, who understands what needs to be done and won’t make a fuss like these two commanders? While none of these things bothered me that much while I was reading, I think the book would have benefited from shoring up the plot on these points.