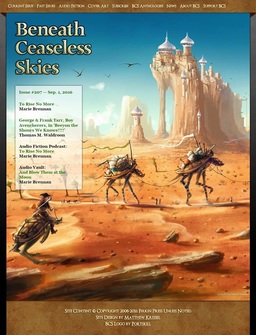 Black Gate is up against Beneath Ceaseless Skies for a World Fantasy Award this year, and I don’t mind telling you, that’s some stiff competition. BCS has been publishing since October 2008 — nearly 8 years — hitting its bimonthly schedule without missing a beat. Speaking as someone who managed one issue a year, that’s pretty impressive. It’s become one of the top markets for Adventure Fantasy, and has published stories by Aliette de Bodard, Gemma Files, Catherynne M. Valente, Fran Wilde, Kameron Hurley, E. Catherine Tobler, Tina Connolly, Sarah Pinsker, Cat Rambo, Yoon Ha Lee, K.J. Parker, Rachel Swirsky, Bruce McAllister, Saladin Ahmed, Carrie Vaughn, and many others.

“To Rise No More” by Marie Brennan
Ada shook her head, staring once more at the Thames. “I do not think what I had in mind will work. The size of the wing, if it is to be large enough to lift me—my body cannot possibly generate enough force to move it. Not with the speed required.” Especially not when she kept growing. Every inch meant more weight for the wings to lift, without a commensurate gain in strength.

“George & Frank Tarr, Boy Avencherers, in ‘Beeyon the Shours We Knowe!!!!’” by Thomas M. Waldroon
Where’s it all come from? George wondered. Where you think it comes from? Frank scoffed. It’s fields and roads and house lots. It’s America, running westwards to somewhere else, anywhere else, someplace maybe better, like Great-Grandpaps did, and like Papa did, and just like we’re doing.

“To Rise No More” by Marie Brennan (Duration: 41:40 — 28.62MB)
No matter how many times she watched it, Ada could not see how the transformation happened.

“And Blow Them at the Moon” by Marie Brennan (Duration: 1:06:13 — 45.47MB)
Introduced by the author, explaining how she works the plots of her Onyx Court historical fairie novels and stories into history without sidelining the actions taken by real people, using the moral dilemmas faced by the characters.

Galápagos Regained by James Morrow
Chloe’s first instinct was to hustle Willy and Annie out of the zoo, lest they learn prematurely there was such a thing as atheism.

This month’s cover, “Tortoise Caravan,” is by Marek Hlavaty. We last covered Beneath Ceaseless Skies with issue #203.