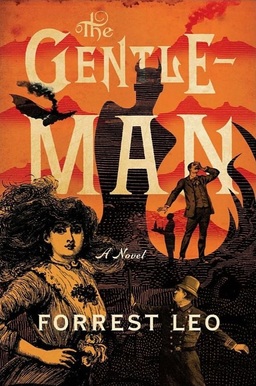 Well, we’re heading into fall (at least, for those readers in the Northern Hemisphere), and that’s reading season. Time to snuggle down with a good book or three, as the weather turns foul outside. My choice for Labor Day weekend is the debut novel by Forrest Leo, a Monty Pythonesque fantasy about a poet who accidentally sells his wife to the devil — then assembles a band of adventurers to rescue her. BookRiot labels it “a delight,” and Locus calls it “Wonderfully demented and comical… as if Tom Holt and Oscar Wilde got together and decided to do up a steampunk novelty… a robust, riotous romp.”

When Lionel Savage, a popular poet in Victorian London, learns from his butler that they’re broke, he marries the beautiful Vivien Lancaster for her money, only to find that his muse has abandoned him.

Distraught and contemplating suicide, Savage accidentally conjures the Devil — the polite “Gentleman” of the title — who appears at one of the society parties Savage abhors. The two hit it off: the Devil talks about his home, where he employs Dante as a gardener; Savage lends him a volume of Tennyson. But when the party’s over and Vivien has disappeared, the poet concludes in horror that he must have inadvertently sold his wife to the dark lord.

Newly in love with Vivian, Savage plans a rescue mission to Hell that includes Simmons, the butler; Tompkins, the bookseller; Ashley Lancaster, swashbuckling Buddhist; Will Kensington, inventor of a flying machine; and Savage’s spirited kid sister, Lizzie, freshly booted from boarding school for a “dalliance.” Throughout, his cousin’s quibbling footnotes to the text push the story into comedy nirvana.

Lionel and his friends encounter trapdoors, duels, anarchist-fearing bobbies, the social pressure of not knowing enough about art history, and the poisonous wit of his poetical archenemy. Fresh, action-packed and very, very funny, The Gentleman is a giddy farce that recalls the masterful confections of P.G. Wodehouse and Hergé’s beautifully detailed Tintin adventures.

Well, that really puts spousal confessions like Honey, I Shrunk the Kids in perspective. Honey, I Accidentally Sold You to Satan. I feel a lot better about my husband’s having (otherwise harmlessly) totalled his car now.

Our adventurers are harrowed by the social pressure of not knowing enough about art history? This is so my kind of book.

I know what’s coming up immediately after my current project: THIS BOOK.