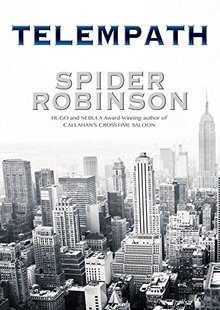 I’m a long-time fan of Spider Robinson’s work, and I’ve written about his Callahan’s Bar Stories and novels here, and here, but today I’d like to take a look at some of his work that doesn’t get referred to anywhere near as much.

Those of us familiar with Robinson’s work know that, even at its most humorous, it’s what you might describe as “idea-heavy.” This isn’t in the strict, hard science sense, though there’s definitely some hard science in there, but more in the social, philosophical sense.

Telempath (1983) is a post-apocalyptic thriller of the “what if?” variety, but where the end of the world as we know it comes about in a most unusual way. Sure, there was a plague, and by far the majority of the race was wiped out, but not in any expected or commonplace way. The virus that was accidentally(?) released exponentially increased humanity’s sense of smell. As a concept, it seems humorous at first – the kind of idea that people smoking dope kick around – but as Robinson shows us, if it actually happened it wouldn’t be very funny at all. For one thing, such a change would make it impossible for people to live in cities, or to support technologies that produce unpleasant odours, which is, like, all of them. Can anyone say pollution? 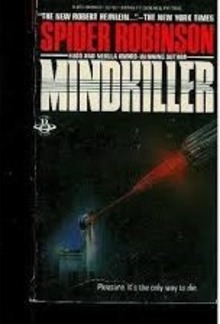 This was Robinson’s first novel (not the first published), but it’s informed by many of the philosophical and social memes you find in his later work, environmental issues, racial and cultural tensions, the concepts of personal responsibility and guilt, and science as both the problem and the solution.

The latter is further examined in MindKiller (1982), my favourite of the non-Callahan’s stuff, and the first, and best, of the Lifehouse Trilogy. I’m not going to say you can skip the others, but this one does stand well alone. It’s got a terrific opening: Norman Kent is having the worst day of his life. He can’t even successfully kill himself. The guy who stops him from throwing himself off the bridge isn’t a good Samaritan, however, he’s a mugger.

Again, much of Robinson’s work contains this type of black humour, but the ideas in the book are serious ones, that we can all relate to. What are your greatest fears? What constitutes our identities? Is it our memories? What happens if our memories are tampered with, or are unreliable? 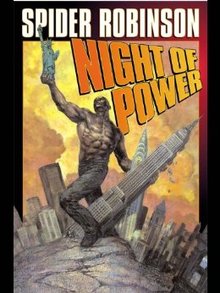 Night of Power (1985) is an example of the “if this goes on . . . ” SF story premise, specifically examining the continuance of racial tensions in the US, as an interracial Canadian couple and their 13 year old daughter visit Manhattan as black Americans prepare to take over the states of New York and Pennsylvania. I seem to remember Robinson saying that his original title for the book was “Race War” but his publisher considered that a little too “on the money” so they changed it.

It’s a powerful theme, for a powerful book, but this is the most talk-heavy of the three I’m looking at here; at least two high action scenes take place “off stage,” a choice that I don’t think would have been made today.

There is a consistency of vision in all of Robinson’s work, and if his vision doesn’t appeal to you, or if it doesn’t mesh with your world view, then his books are just not going to resonate for you. Though it seems contradictory, you’ll find him either too naïve, or too cynical. In reality, he’s both. In his Callahan’s Bar Stories he bluntly articulates his philosophy that that joy shared increases and pain shared decreases. In his novels he suggests in more subtle ways that it’s better to die on your feet than to live on your knees; or as the Spaniards have it, better a dead lion than a live jackal.

Violette Malan is the author of the Dhulyn and Parno series of sword and sorcery adventures (now available in omnibus editions), as well as the Mirror Lands series of primary world fantasies. As VM Escalada, she writes the upcoming Halls of Law series. Find her on Facebook and follow her on Twitter @VioletteMalan.