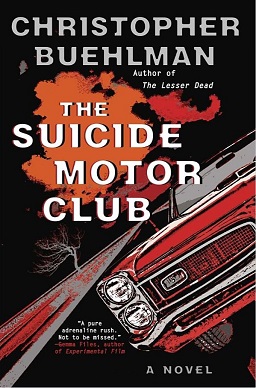 Christopher Buehlman is a fast-rising horror star. His debut novel, Those Across the River, was nominated for a World Fantasy Award, and he followed it quickly with The Necromancer’s House and Between Two Fires. Last year’s The Lesser Dead, a novel of vampire clans in New York, won the American Library Association’s award for Best Horror Novel of the Year, and Tor.com called it “surprising, scary, and, ultimately, heartbreaking.” Based just on the gonzo description his latest, The Suicide Motor Club, may be his best yet. Check it out.

Remember that car that passed you near midnight on Route 66, doing 105 with its lights off? You wondered where it was going so quickly on that dark, dusty stretch of road, motor roaring, the driver glancing out the window as he blew by.

They roam America, littering the highways with smashed cars and bled-out bodies, a gruesome reflection of the unsettled sixties. But to anyone unlucky enough to meet them in the lonely hours of the night, they’re just a blurry memory. That is — to all but one…

Two years ago, they left a witness in the mangled wreck of her family car, her husband dead, her son taken. She remembers their awful faces, despite their tricks and glamours. And she’s coming for them — her thirst for vengeance even more powerful than their hunger for blood.

On the deserted highways of America, the hunters are about to become the hunted…