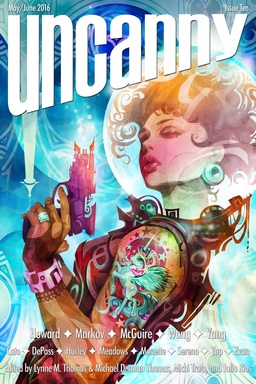 Over at Tangent Online, reviewer Herbert M. Shaw weighs in on the May/June Uncanny, which features a lot of tales of the undead this issue.

“The Sound of Salt and Sea” by Kat Howard
When the ghost of a brash face from his past returns, it is up to an island’s mortal protector to right a recent wrong. Secluded to a tropical are where the dead rise at low tide, the protagonist describes his struggle as the sole protector with a wide array of metaphors and similes. Howard takes on the undead by fighting fire with fire in a story about friendships, family ties, and skeleton horseback riding.

“You’ll Surely Drown Here If You Stay” by Alyssa Wong
A second-person novella places the reader as the main character to become immersed in the mindset of a person capable of controlling the dead. Some call it witchcraft, some call it a family trait. Through deep understandings of the other character’s perceptions, Wong manages to create a sense of how dangerous and significant your power can be as you lead an expedition to an abandoned mine to rid it of its infestation.

“The Drowning Line” by Haralambi Markov
This issue’s trend of stories involving the undead and death by water culminates in a sort of ‘Freddy meets Jason’ myth held by one person. After a demon killed the father, it is up to the son to prevent it from coming for his newly teenage daughter on the cusp of womanhood. His journey is plagued by a past he cannot let go of for fear that being forgotten will not mean it is gone. As the only male writer in this month’s issue, Markov concludes these stories by unknowingly borrowing aspects of the previous four, those being family values, brash actions, facing the dead, and the ever-present environment of water.

Read Shaw’s complete review here. The magazine also includes fiction by Seanan McGuire, Kameron Hurley, and JY Yang, and non-fiction by Foz Meadows, Sarah Monette, Stephanie Zvan, and Tanya DePass, plus poetry, interview, and an editorial. All of the content became available for purchase as an eBook (PDF, EPUB, MOBI) on May 1, 2016.

Episode 10A: Editors’ Introduction, Seanan McGuire’s “Ye Highlands and Ye Lowlands” (as read by Amal El–Mohtar), Beth Cato’s “Deeper Than Pie” (as read by Erika Ensign), and an interview with Seanan McGuire conducted by Deborah Stanish.

Episode 10B: Editors’ Introduction, Haralambi Markov’s “The Drowning Line” (as read by Heath Miller), Isabel Yap’s “Alamat” (as read by Erika Ensign), and an interview conducted by Deborah Stanish.

The cover this month is by Galen Dara.

I’ll admit the stories don’t sound that much in line with my reading tastes, but I sure do love the cover.