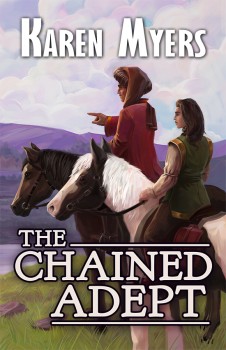 This month, we look at The Chained Adept by Karen Myers.

Penrys has worked at the Collegium—a college of wizards—for the past three years, but she’s not from there. No one knows where she’s from. She has enough magical knowledge and power to frighten the wizards of the Collegium, but she has no memories prior to being found lying naked in the snow and no clues as to her origins aside from the chain she wears around her neck and her furred ears, neither of which anyone has seen before. The Collegium gave her the title of adept and access to their library, but her research taught her less about herself than about the use and creation of magical devices. When one of those devices flings her halfway around the world, she only discovers more questions.

Penrys finds herself in an army camp under magical attack. After helping to defeat the attack, she is put under the watchful care of the wizard Zandaril, who is from the nomadic horse-herders of Zannib. His nation is renowned for its mind-wizards, but even he is in awe of what Penrys can do with her mind-magic. It goes far beyond telepathy to learning skills and language from those nearby and detecting people and even animals at incredible distances. It’s more than enough to make the Kigali army suspicious. The Kigali have no wizards, which explains why they turned to the allied nation of Zannib for magical assistance for their expeditionary force. They’re investigating rumors of an invasion in the Neshilik region.

Penrys soon makes herself useful, uncovering a plot to sabotage the camp, and thereby earns enough trust to be sent on a scouting mission with Zandaril to find out what they can about the Rasesni invaders’ wizards. They soon discover that the Rasesni are not so much invading as fleeing, and that what they’re fleeing has much to do with Penrys’s forgotten past.

Penrys’s mysterious past is probably the central theme of this book. She doesn’t even know whether she’s a real person or some sort of construct. The irremovable chain points toward a purpose, a mission that she doesn’t know—was it benevolent exploration? Espionage? Conquest? She has plenty of speculation towards who she is and what her purpose is, but no knowledge. Penrys’s motivations throughout the book are decent and honest, and her fears concerning what she truly is and what she might become feel authentic and give her character depth. But ultimately, little is revealed. Penrys doesn’t remember anything new, she doesn’t discover her purpose, she gets only hints by the end of the book. It’s clear that discovering who she is will be a multi-book plot, but I wish she could have discovered more in this one.

Especially since Penrys is so central to the plot. The viewpoints shift between Penrys and Zandaril and Tak Tuzap, a boy who has escaped from the Neshilik region with information vital to the Kigali campaign. Each of them has some role, but ultimately Zandaril’s doesn’t amount to much. He’s a wizard, but not as strong or as knowledgeable as Penrys, so his main role is love interest and expositor concerning the unfamiliar lands where Penrys finds herself. I don’t recall him handling any major problems, or coming up with any key insights. When he’s separated from Penrys it looks briefly like he might have a chance to shine, but it’s not really clear that what he does do contributes to the resolution in any meaningful way. Zandaril’s a fun and interesting character, with understandable goals and motivations. He’s genuinely likeable, perhaps moreso than Penrys, but I would have liked to see him do more.

Tak Tuzap’s plot purpose is a bit more significant, as he gets information and provides contacts that Penrys and Zandaril couldn’t have managed on their own, but ultimately it’s a pretty small role. Tak’s lost his whole family, and is left with the heavy responsibility of carrying on his family business, a job he takes on eagerly. But that’s not really a central part of the novel, so we don’t see too much of it.

At times, the novel moves fairly slowly. There’s a lot of excitement at the beginning, where Penrys helps out the Kigali force, but they treat her with suspicion until she exposes a plot to destroy them. Then there’s a lot of traveling and spying, a quick escape, a lot of scholarly discussion that also serves to explain the magic system and exactly how powerful Penrys is, before things get exciting again and build into a final confrontation, followed by a long denouement. I felt that much of this was too detailed. I had difficulty following the travels, due to the abundance of Kigali and Rasesni names that weren’t easy to keep track of. The scholarly exchanges were more involved than was really necessary to understand the big fight at the end. I think the novel would have benefited from being tightened up, and maybe a more even distribution of the exciting parts. When things do become exciting, though, the plot quickens and the story becomes very absorbing. I found much of the novel a lot of fun.

There is a sequel, Mistress of Animals, available, and the intriguing question of Penrys’s origin leaves a lot of ground for it to cover.