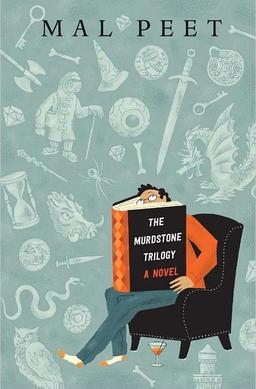 How hard can it be to write a fantasy trilogy? That’s a topic that came up more than once at the Nebula Awards this month. You know what also came up? A copy of Mel Peet’s The Murdstone Trilogy, which deals with that very question. I was fortunate enough to get one of the few copies that showed up on the free book table at the Nebula weekend, and I was very glad I did. It proved to be the prize acquisition of the weekend.

Written by Carnegie Medalist Mal Peet, it’s a black comedy about an impoverished literary writer who makes a pact with the devil to write a sword-and-sorcery trilogy. It was sold as an adult novel in the UK, but is being marketed as YA here in the US. The Wall Street Journal calls it “A deliriously freewheeling send-up of the publishing industry and the current sword-and-sorcery craze,” and Publishers Weekly says it’s “enormous fun, especially for those familiar with the literary conventions it skewers.”

Award-winning YA author Philip Murdstone is in trouble. Flat broke. His star has waned. No one wants his novels about sensitive teenage boys. So his ruthless agent, Minerva Cinch, convinces him that his only hope is to write a sword-and-sorcery blockbuster. High Fantasy, specifically, or, to be more precise, Phantasy with a p-h. Unfortunately, Philip — allergic to the faintest trace of anything Tolkien — is utterly unsuited to the task.

In Philip’s darkest, whiskey-fueled hour, a dwarfish stranger comes to his rescue. But the deal Philip makes with Pocket Wellfair turns out to have Faustian consequences. The Murdstone Trilogy is a richly dark comedy described by one U.K. reviewer as “totally insane in the best way possible.”

I really enjoyed this one. I have a UK ARC that I’ll be holding on to for dear life…

Thanks Peadar! If you ever want to do a review, let me know… I’d love to have one.

Thanks, John. It’ll be a while, I think! I’m awaiting a storm of rewrites. This is a direct sequel to A Game of Rewrites…

I’m about 3/4 way in and loving it. I’d never have heard of it without this post. So once again, thank you, Black Gate.