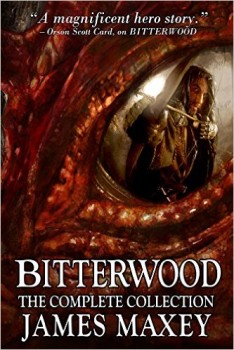 This month’s self-published book review is of Bitterwood by James Maxey. I’m stretching the definition of self-published in this instance, as Bitterwood was initially published by Solaris in 2007. But the version I’ve been reading is in Bitterwood: The Complete Collection, which appears to have been published by the author, and includes new material. The reason that I’m stretching definitions here is that I’ve received very few submissions recently. So if you’re interested in seeing your novel reviewed, please submit it to me.

Bitterwood is the story of a world ruled by dragons. These are not your standard fantasy dragons, though. They are four limbed — two hind claws, and two wings with foreclaws that allow manipulation — and they do not breathe fire. They’re also considerably smaller than fantasy dragons, the smaller ones being not much larger than a man, but they are considerably more civilized. They have a well-developed culture, and a hierarchy ruled by the large sun-dragons, served by the deft and scholarly sky-dragons, and the worker, earthbound earth-dragons. And beneath them all are the humans who work the fields and pay tribute. The dragon king, Albekizan, owns the entire known world, and everyone lives on it at his sufferance. The humans are considered little better than parasites, held in contempt and hunted for sport.

Except for Bant Bitterwood. Converted at a young age to a harsh form of Christianity by the wandering prophet Hezekiah, Bant was force to abandon his family by the prophet, and subsequently lost them to the dragons. Bitterwood abandoned his faith and swore vengeance, and has been hunting dragons ever since. Every dragon knows his name, and fears him as The Ghost Who Kills — a man who should be dead, who comes and goes like a ghost, and kills without mercy.

But Bitterwood is not the hero of this story. He is an important player, and his murder of the king’s son, Bodiel, sets the plot in motion, but he is not the one who brings it to its conclusion. That is mainly the role of Jandra, a human raised by the sky-dragon wizard Vendevorex.

Vendevorex is well-meaning, and has a great deal of power at his disposal. Much of it involves turning invisible and illusions, but he can also throw fireballs, reshape matter, and heal wounds. He’s taught Jandra many of his tricks, though by no means all. But ultimately, Vendevorex is selfish. His first instincts are to protect himself and Jandra, but he’s not exactly eager to risk Albekizan’s wrath when the king decides to destroy the human race after the murder of his son.

It’s only Jandra’s insistence that leads Vendevorex to do what he can, and he’s always ready to run when the fight goes poorly. So Jandra takes on the role of protagonist, and she handles it well. Raised by the king’s wizard in the court, she’s more at home among dragons than humans, but when Albekizan threatens the humans with genocide, she knows that she must do something. She is assisted in this by Pet, a human who is literally the pet of a sun-dragon. Pet is often cowardly and self-serving, but when the situation calls for it, he’s willing to sacrifice himself to save his fellow humans.

Ultimately, Jandra, Pet, Vendevorex, and Bitterwood must stop Albekizan and rescue the human race from his grip. Here, I think, the book stumbles a little. After being the driving force through most of the book, Jandra doesn’t actually do a lot at the end. Vendevorex, Bitterwood, and even Pet are more important to the climax than Jandra, who spends her time chasing false leads and dealing with emotional trauma.

While Jandra is the most influential character, she’s not the most developed one. She’s young, and somewhat naïve, with a straightforward past. Her mistakes, though, are at worst ones of youth and idealism. Bitterwood and Vendevorex each have more complex and tragic histories, which interact in surprising ways. Bitterwood is driven by his hatred, and well-founded as it is, it ultimately blinds him and results in yet more death to the ones he cares for. Vendevorex is driven by his guilt, which is often the result of the decisions he makes based on expediency. Each must do better to achieve a happy ending.

One question that’s fair to ask is whether Bitterwood is truly a fantasy novel. It has dragons, and magic, and mysterious prophets in a medieval setting, true. But ultimately the magic and dragons are revealed to have a technological basis, and even Bitterwood’s dragon-killing prowess derives from interaction with advanced technology. Abekizan’s kingdom is recognizably our world, far into the future, after the collapse of civilization and the rise of the dragons. There are hints of this early on, but I was still disappointed to learn that all the magic was merely technology in disguise. Despite all this, Bitterwood is more a fantasy novel than a sci-fi one, centered on heroic quests and wizardly might rather than figuring out how the magic works.

I’m only reviewing the first book in the ebook, though there are a total of four in Bitterwood: The Complete Collection, including one that has not been previously published. Considering how much I enjoyed the first one, the $0.99 price for the ebook at Amazon is a definite bargain. The paperback is available for the considerably higher cost of $27.00.

Hmm. I’ve had the paperback trilogy signed by Maxey since meeting him at DragonCon ’08…I see them in my TBR pile, but they never seem to make the cut. Now I’m not sure I’ll ever read them to be honest.