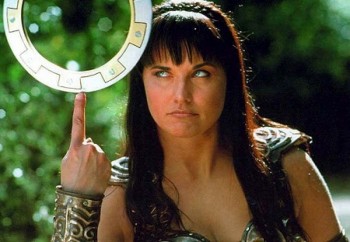 Did you hear about the Xena reboot? How about the new Voltron series? Twin Peaks is re-launching this summer, and you may already have your tickets to the next comic book movie.

What is up with that? Is Hollywood completely out of ideas? Have they gotten so risk-averse that all they can do is recycle old material? Or is it simply nostalgia run amok, a nation full of millennials who don’t want to grow up?

I think it’s something different, and something pretty exciting. I don’t think our love of reboots is a lack of creativity at all. In fact, I think this is an incredibly vibrant artistic period, and is about to become even more so.

Why? Because we’ve seen this before. Bear with me, guys.

The Hellenistic period of the Ancient World begins with the death of Alexander the Great and extends until the rise of the Roman Empire. There, we got our hard facts out of the way. You may even remember that from history class.

Historians like their categories, and periods of history broken down into neat charts with clear defining events.

But in this case, we can talk about the way Ancient Mediterranean Culture shifted dramatically in a very short period of time. We became more and more able to talk about a Mediterranean culture, for one. The disparate cultures of Greece, the Near East, Northern Africa, and the Italian peninsula came into much closer contact because of Alexander’s Imperial ambitions. Trade had existed before, but the construction of travel networks and large cities allowed for an even greater exchange of information.

And then there was the Library of Alexandria. Suddenly, and for the first time, the greatest works of literature the world had ever known, from Homer (possibly compiled for the very first time in the two works we know as The Iliad and The Odyssey) to Herodotus to Aristotle to, tragically, works we don’t even know about because of the library’s abandonment and destruction, were all brought to one place, and was available to anyone. Well, anyone who could read. And get to Alexandria to study.

The literature that came out of those who studied at the Library remains to this day. It completely changed literary culture. Or, rather, it invented literary culture. Being able to access hundreds of regional literatures meant the invention of the idea of literature in Greek with a common pool of references. Now there was a whole new playground for artists to play in, a new set of techniques to explore and a world of myth to re-tell.

So with those tools, the first thing they wanted to do was re-tell old stories in their own, new ways. Callimachus specialized in hymns to the Gods: his style was an inspiration to poets up to the present day. No Callimachus, no Ovid. No Bocaccio. No Shakespeare. Apollonius of Rhodes wrote the Argonautica, which is essentially Homer prequel fanfic, and in the process wrote the first internal monologue. Playwrights invented New Comedy, which reads as remarkably familiar if you’ve watched a sitcom.

And then, they decided to invent this little thing called the novel.

We have a global culture that is able to communicate at an unprecedented pace, and literature is being translated across languages at speeds we couldn’t have dreamed of even twenty years ago. I can leave home in Wisconsin and be anywhere in the world within twenty four hours.

And we have this new, amazing repository of information and culture.

So what do we see?

Star Wars, Justice League, The Avengers, and Star Trek make up the biggest franchises out there today. Fanfiction is written and traded like baseball cards, and the line between fanfiction and “official” fiction gets increasingly blurry as time goes on. (The first thing Neil Gaiman ever wrote was Doctor Who fanfiction. He went on to write two episodes that went into production. If The Force Awakens is made without George Lucas, is it canon or fanfic?) And Xena is going back on the air. With her previous subtext made text.

Reboots may grow tiresome. Yeah, ok, we can leave the “may” out of there. It’s getting old, and not everything needs to be remade. (Seriously? Voltron?)

But those reboots aren’t because of a dearth of creativity. They may reflect the power of nostalgia, it’s true. But more than that, they represent a democratization of culture. Doing another round of Star Wars isn’t just about redoing the special effects. It’s not just mining proven ground for money (although that certainly motivates the studios to fork over the cash).

It’s about owning a reinterpretation of a common mythology.

We don’t have religions that bind us as a culture anymore. We don’t have a unified history that we can all stand behind, because culture is no longer constrained by geographic boundaries. But we do have Marvel and DC. Those created mythologies and modern folklores are giving us a shared meaning that we have otherwise lost.

If you’re not sold yet, take a look at some of the other top selling cultural icons of the last few years. Hamilton has been hugely successful, not only because it’s well written and innovative in terms of its musical style but because it retells a familiar history in an new way. Lin-Manuel Miranda’s Alexander Hamilton isn’t the same man as the one who appears on the ten dollar bill. His compatriots share even less resemblance to their historical antecedents. But that isn’t the point: he represents a contemporary dream of what we wish our founders had been, and of what we want our best selves to be.

Miranda’s Hamilton is our own Heracles: painfully flawed, suffering a tragic end, and yet acting as an emblem of a set of national ideals that we aspire to far more than we manage to accomplish.

Similarly, James Bond has seen a return to cultural prominence, with 2015’s Spectre being one of the year’s top grossing films. Bond isn’t a supernatural character (in theory): like the fictional Hamilton he is an almost mythological image of what we wish we could be: capable of impossible physical feats, socially adept, keenly intelligent, and able to look incredible both in white tie formalwear and covered in debris. Often both at once.

The desire to keep returning to these wells as consumers of culture comes from a real desire for a coherent cultural mythology. We are in the midst of a number of deep and global changes, and we have left behind a lot of what built our communities in the past. We no longer build ties based on religion, ethnicity, or geography: we are simply too mobile, too diverse, and too interconnected for that to be effective. But we can build communities on shared stories. And so far, that is exactly what we are in the process of doing. This is the first stage of a new milieu being built.

When the Hellenistic writers got going, they invented the novel. I can’t wait to see what we can do next.

Wonderful post overall! Hamilton as Heracles is a point Miranda would appreciate, and may not have thought of himself. I certainly hadn’t, but I know it’ll come up in my teaching. And your caption to the cabinet meeting is hilariously spot-on.

It may be that the sprawling multivolume megaseries is exactly one of the forms that arises from the state of affairs you describe.

I think Xena could be a great candidate for a reboot. I didn’t think all that much of the original series, but then, I didn’t love the original Battlestar Galactica…but dang if that wasn’t one of the most most ah-may-zing reboots of all time!

Oh, and Twin Peaks? I am sooo ready for another dose of “diner pie” 😉

Oh, forget the pie. Nothing comes close to a damn fine cup of coffee.

“Oh, forget the pie. Nothing comes close to a damn fine cup of coffee.”

Lol, …it’s been over 25 years since that show first aired, and STILL, the discovery of Laura’s body is burned into my memory. Absolutely captivating. Only remember bits and pieces after that, but Agent Cooper ordering coffee and cherry pie is up there :-). Heck, you can still order “Twin Peaks Cherry Pie” online! Ahhh, the humanity ; -)

Love and agree with the overall thesis, but a minor quibble: “When the Hellenistic writers got going, they invented the novel.” Wasn’t the novel invented in England about 1500 years later?

I love your Hellenistic connection!

@jeffreycrogers – The modern novel came around then. But the novel first appeared PROBABLY (Classicists argue about this a lot) around 250 BCE. If you picked up one you would immediately recognize it as a novel: it’s a piece of long extended prose with a single narrative, fleshed out characters, and a clear beginning, middle and end. They contain passages of both narration and dialogue, and while they are light (and sometimes downright silly) they are unmistakably novels. The form then faded from popularity for a long period for a number of reasons by the fourth century CE.

I should really do a blog post or three on them, in fact. Hey, now I know what I’m doing next week!

Sarah – I was thinking of something a bit more like Lemonade, in fact. Or even Dragon Age: multi-genre, multiplatform and multi-media storytelling. I’ve been pondering the idea of writing books that have to be digital to tell their stories. Imagine night blooming books, or Books of Hours that can only be read in certain conditions. Books that have to be solved, or won over to tell their whole stories. The possibilities are only just beginning to show themselves.

Elizabeth – thanks; fascinating! Looking forward to more on history & evolution of novels!

Ah, you’re talking about exactly the kinds of things Andrew Plotkin does. He grew up on Zork text adventures, but then took them in increasingly weird and sometimes lyrical directions. When the interstellar scholars try to piece together the origins of the Hellenist-oid period we’re in, Plotkin will be one of their touchstones.