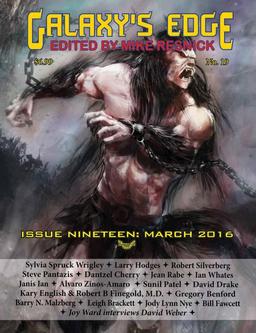 Mike Resnick’s Galaxy’s Edge magazine has been published since March 2013; it’s a bimonthly that has both print and digital editions. Truth be told, I thought it was a straight-up science fiction magazine, and didn’t pay much attention until recently. I finally took a closer look this month, and it seems like Galaxy’s Edge could be of interest to fantasy fans after all. The latest issue, #19, is cover-dated March 2016; Mike’s editorial includes a reprint of the last of his F&SF columns from the 90s, which celebrates forgotten treasures. Here’s a taste.

Readers of this column know that the late C. L. Moore is one of my favorite writers. Her Northwest Smith and Jirel of Joiry stories are classics of their type, and she was also able to produce truly brilliant works of art such as “Vintage Season.”

I’d like to tell you about one of her less well-known books. It’s called Judgment Night, and it’s sort of a transition between her early days as a Weird Tales fantasy specialist and her later career, in collaboration with her husband Henry Kuttner, as a creator of highly-polished, fast-paced science fiction.

Every pulp writer referred to “pleasure planets” — but only Catherine Moore created one that was worthy of the title: “Cyrille, where beauty and terror were blended for the delectation of those who loved nightmares.” It’s the world where much of Judgment Night takes place.

And, in an era when girls in science fiction stories were just lumpy boys, fit only for holding the equivalent of the hero’s horse, Moore created yet another powerful, competent woman, fully the equal of Jirel — the memorable Juille, who rebels against a rebellion. 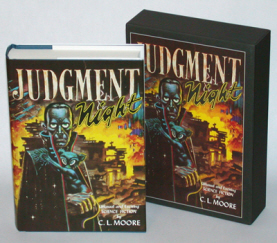 To Catch a Comet by Sylvia Spruck Wrigley
Pretty Pictures at War by Larry Hodges
Gianni by Robert Silverberg
Out of Print by Steve Pantazis
C/O The Village of Monsters Past by Dantzel Cherry
Auriga’s Streetcar by Jean Rabe
Montpellier by Ian Whates
Prayerville by Janis Ian
The Higher, the Fewer by Alvaro Zinos-Amaro
The Man Who Saved Manhattan by Sunil Patel
Smokie Joe by David Drake
Shattered Vessels by Kary English and Robert B Finegold, M.D.

See the complete contents of the current issue here.

Galaxy’s Edge is edited by Mike Resnick and published by Phoenix Pick, the science fiction and fantasy imprint of Arc Manor Publishers. This is the 19th issue. Individual issues are $6.99; US print subscriptions are $37.74 (six issues) or $14.99 in a variety of digital formats. Buy subs at the website.

The cover artist this month is uncredited.