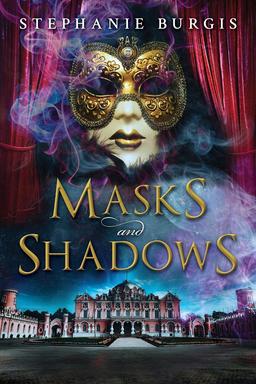 Stephanie Burgis is the author of the Kat, Incorrigible trilogy of Regency fantasy adventures for kids. Masks and Shadows, a tale of music, masquerades, and magic, is her first historical fantasy novel for adults, and it looks very promising indeed.

It’s getting some marvelous notices from writers I admire, including Aliette de Bodard (“Romance, music, and dark alchemy rise to a pitch-perfect ending”), Ellen Kushner (“Elegant and exciting… [it] delighted and enlightened me as much as it entertained”) and Kate Elliot (“Deftly told and hugely engaging… weaves together… a thrilling taste of love and politics, and the bitter threat of a deadly magic.”)

The year is 1779, and Carlo Morelli, the most renowned castrato singer in Europe, has been invited as an honored guest to Eszterháza Palace. With Carlo in Prince Nikolaus Esterházy’s carriage, ride a Prussian spy and one of the most notorious alchemists in the Habsburg Empire. Already at Eszterháza is Charlotte von Steinbeck, the very proper sister of Prince Nikolaus’s mistress. Charlotte has retreated to the countryside to mourn her husband’s death. Now, she must overcome the ingrained rules of her society in order to uncover the dangerous secrets lurking within the palace’s golden walls. Music, magic, and blackmail mingle in a plot to assassinate the Habsburg Emperor and Empress — a plot that can only be stopped if Carlo and Charlotte can see through the masks worn by everyone they meet.