Rich Horton and Matthew Wuertz have been writing retro-reviews of vintage SF magazines for Black Gate for years, and they have a lot of fans. In fact, it seems to me there’s a steadily growing interest in classic SF, and SF magazines, and a fresh crop of websites popping up to feed that interest. One of the best I’ve found is Gideon Marcus’ Galactic Journey, which reviews SF magazines as they appeared, 55 years ago.

Step through a portal that leads 55 years to the past. 1961: A youthful President named Jack Kennedy promises to reinvigorate America. Formal relations with Communist Cuba have been severed. The first American Mercury flight, piloted by a chimpanzee, anticipates an impending manned mission. Science fiction is a burgeoning field in print and on screen. It is the world of the Galactic Journey.

Jaunt back five and a half decades and dive into the sci-fi and Space Race headlines of the day. See the world through the eyes of a fan with a vintage time frame, but a progressive mindset.

At the Hugo-recommended Galactic Journey (www.galacticjourney.org), you’ll experience the world of day by day, exactly 55 years ago. You’ll stroll down memory lane — or be immersed in a whole new world. Read the in-depth articles on each satellite launch, with behind-the-scenes looks at the people who made them fly. Enjoy the thorough, slightly snarky, and never dull reviews of fiction and films, with links to copies of the reviewed works so you can follow along at home. Live an entirely different time without leaving the comfort of your screen.

Gideon covers F&SF and Analog every month, and the bi-monthly Galaxy and IF in alternating months. He’s looking for reviewers to cover Amazing and Fantastic. The blog has been active since October 2013, starting its coverage in late 1958.

I’ve just hired a pair of guest columnists… One is a Cold War historian named Rosemary Benton. The other, Ashley Pollard, will provide a British perspective (and allow the Journey to plausibly cover science fiction on the other side of the Pond).

Of course, several of my readers provide such comprehensive reviews in the Comments section (particularly Victoria Silverwolf and DemetriosX) that they might as well get billing as unpaid contributors!

I also try to read the books published each month, as far as I can find them. I watch Twilight Zone weekly, and I manage to see every genre movie as they come out. 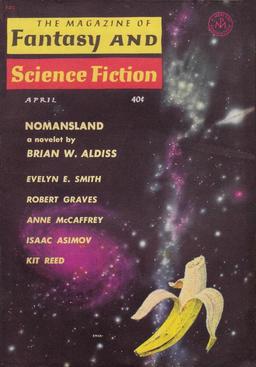 Gideon’s approach is a fresh take on magazine reviewing, and his voice is refreshingly enthusiastic. He also has an eye for historical trends. Here’s part of his review of the April 1961 issue of The Magazine of Fantasy & Science Fiction, which appeared 55 years ago this week, for example.

Speaking of permanence, I think April 1961 will be a red-letter date remembered for all time. It’s the first time, that I’m aware of, that women secured equal top-billing on a science fiction magazine cover. To wit, this month’s Fantasy and Science Fiction features six names, three of which belong to woman writers. Exciting stuff, particularly given my observation that, while female writers make up only a ninth of the genre’s pool, they produce a fourth of its best stuff.

Case in point: Evelyn Smith’s “Softly While You’re Sleeping” is a clever piece about a young woman from the old country who is wooed by a passionate vampire. She ultimately resists his advances, unwilling to undergo the transformation that is the inevitable end of his draining attentions. The story is older than Stoker, but the writing and the social commentary are entirely modern. Four stars…

The next story is something special. Every so often, a story comes along that introduces something truly new. “The Ship Who Sang,” by new author Anne McCaffrey, brings us the lovely concept of sound-minded but hideously crippled children given mechanical bodies and groomed to become the “brains” of interstellar ships. These are two-person scout vessels, the other crew-member being the “mobile” element. Inevitably, the relationship is a close one, and this bonding makes up much of the plot (and charm) of “Ship.” In fact, if I have a complaint at all about this story, it is that it is too short; such an intriguing courtship should have more fully developed. McCaffrey’s detached style feels a bit too impersonal for the piece, as well. Still, “Ship” gets an unreserved four stars.

Of course, Anne McCaffrey did continue the story, with five additional tales — eventually collected into the 1969 fix-up novel The Ship Who Sang — and four additional novels.

And see all of our Magazine coverage here.