If you have a book you’d like me to review, please see this post for instructions to submit. I am officially out of stories, since I haven’t received any recently and I’m reluctant to go back to submissions from more than a year ago. 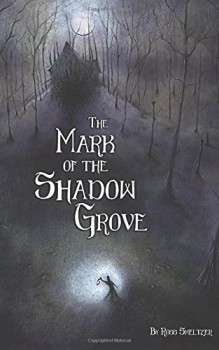 While I usually limit myself to self-published books in my reviews here, I’ll occasionally review small press publications if I’m asked. This month’s review is of one such book, Ross Smeltzer’s The Mark of the Shadow Grove.

The Mark of the Shadow Grove is somewhere between a novel and a story collection. It contains three novellas, “The Witch of Kinderhook,” “Lord of All High and Hidden Places”, and “The Rule of Old Blood.” These three stories are all first person, but each one has a different narrator from a different time period: a necromancer’s apprentice in the 1820s, a young coed in the 1880s, and a journalist in the 1920s. But though the stories are from different perspectives and different times, they are ultimately connected, telling the story of two intertwined families, and the dark secrets that bind them. It is Lovecraftian in its horror, with gods beyond human ken who cause madness in those who encounter them, but it has eschewed any of Lovecraft’s deities for more familiar ones.

“The Witch of Kinderhook” tells its story both through the recollections of Tom, the aforementioned apprentice, and the journal of his missing master, Carver. Carver is not much of a necromancer. In reality he is a medical examiner with a history of fraud, an unhealthy obsession with old books of supposed occult lore, and an ill-founded belief in his ability to apply science to the ancient search for reviving the dead. He has come to Kinderhook to find the witch who dwells there, sure that she knows the secrets he seeks. Carver is disappointed with what he finds, and holds the witch’s attempts to teach him in contempt. Tom, meanwhile, is drawn to the beautiful witch Katrina.

Since a large part of this story is Carver’s diary, and the rest is Tom’s first-person telling, there are a lot of I’s in the telling. This is not helped by the fact that the journal entries are not set apart by either font or indentation, and the narrative sometimes switches from journal to Tom without warning. The switch back is easier, since each journal entry starts with a date, but I think that the book could have benefited by having a clearer delineation between the two voices. That said, it is not as bad as it sounds. The journal is mostly at the beginning, with one last entry at the end, so there are not too many switchovers. Tom’s first person telling is in present tense, which took a bit to get used to, but at least contrasted with the journal, which is mostly past tense.

“Lord of All High and Hidden Places” is the story of Alice Schermerhorn, whose last name will be familiar to those who read the first story. She is a student at newly coeducational Pittsfield College, and she has sought out the mentorship of Professor Hildersham, whose comparative folklore class she stumbled into one day. Hildersham is spellbinding and charismatic, but also a drunkard whose marriage is in shambles. He is obsessed with research on the Horned God, the Lord of All High and Hidden Places, a primordial deity of the wild and fertility. While Alice assists him in what appears to be a research project, searching for the lost Alibek Codex, it becomes clear that his interest is more than academic. He seeks to harness the god’s power for himself, and the results are disastrous.

I liked Alice, at least at first. She was a nice change of pace from the passivity of Tom, an ambitious young woman determined to prove herself. Her experience in this story sours her on humanity in general, and men in particular. If I have one complaint, it’s that her descent into darkness seems disproportionate to what she experiences, horrible as it is. If this were a different type of story, she could have come out of it stronger.

Finally, “The Role of Old Blood” centers on Jim Scordato, a journalist investigating the disappearance of art collector Claude Vaughn. The central figure in his investigation is Ms. Schiaparelli, an artist from whom Claude wished to purchase a piece. A wild and forceful woman, Ms. Schiaparelli may be Jim’s undoing—his dreams warn him that she is his destruction, yet he finds himself desiring that dissolution.

The connection between Jim and Ms. Schiaparelli will come as no surprise to those who have read the previous stories, nor is the bloody end toward which they are heading. I do wish Jim’s descent into madness were more… mad. It seemed more like a descent into ennui, an unwillingness to do anything to save himself from the destruction he sees coming from a mile away. His obsession with Ms. Schiaparelli seems less real than the release she offers him, which seems almost like an act of mercy.

The book is primarily about feminine power, incarnated in the witch Katrina and her descendants, and ultimately in the goddess Gaia. But this power is not the creative and nurturing strength you might expect, but rather the embodiment of life only emerging from death and decay, a life nothing like the human death that feeds it. Masculine power also makes an appearance, most centrally in “Lord of All High and Hidden Places,” but it is not the reason and science that many of the male characters in the novel believe it to be, but vulgar and violent sexuality. But masculine or feminine, the gods in this book are dark and alien, Gaia and Pan refracted through a Lovecraftian lens.

In many ways a small press novel is similar to a self-published novel. You don’t expect the same level of editing as you do from a major publisher, and The Mark of the Shadow Grove certainly has its share of typos and the aforementioned formatting issues. But I didn’t notice anything major, and can’t recall any significant plot holes. The prose was ornate and complex, aiming for the style of the time periods, but I wasn’t always convinced that it hit the time period it was aiming for, or that the style changed as significantly as I’d expect. The prose worked, though, and seemed fitting for the Lovecraftian horror story it was telling.

With some horror stories, I’m left wondering about what just happened at the end. I didn’t feel that way with this story—as complex and convoluted as the plot was, it came together in the ending, which was just as dark as I’d been led to expect.