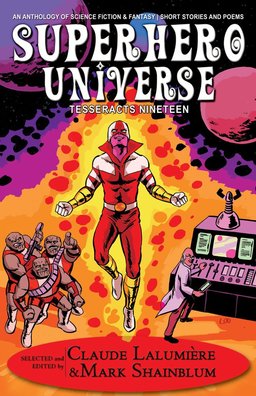 Mark Shainblum has been a friend of mine ever since I wrote him a fan letter after reading New Triumph #1 in 1984, featuring the Canadian superhero Northguard he created with Gabriel Morrissette. And Claude Lalumiere was Black Gate‘s first comics editor, with a lengthy column in every one of our early issues. Together, the two have teamed up to edit the nineteenth volume of Tesseracts, the prestigious and long running Canadian anthology series. The theme this volume is superheroes, in all their fascinating combinations.

The Tesseracts anthology series is Canada’s longest running anthology. It was first edited by the late Judith Merril in 1985, and has published more than 529 original Canadian speculative fiction (Science fiction, fantasy and horror) stories and poems by 315 Canadian authors, editors, translators and special guests. Some of Canada’s best known writers have been published within the pages of these volumes ― including Margaret Atwood, William Gibson, Robert J. Sawyer, and Spider Robinson (to name a few).

Superhero Universe: Tesseracts Nineteen will be published by EDGE Science Fiction and Fantasy Publishing on April 15, 2016. It is 200 pages, priced at $15.95 in trade paperback. But the digital version will be available next week, and is priced at only $5.99. The cover is by Jason Loo.