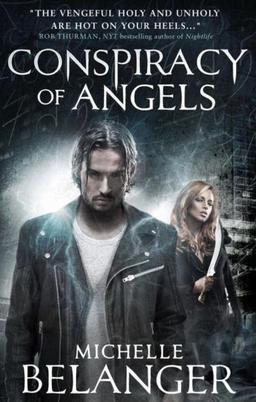 Michelle Belanger is something of a celebrity with modern vampire subculture. She was featured on five seasons of A&E’s Paranormal State as an advocate for the “vampire community” (whatever that is), and she wrote several of its foundational texts, including The Black Veil, an ethical guide for vampires. If you’re a vampire nut, she’s your girl.

Closer to our interests, she’s also the editor of several horror anthologies for Llewellyn Publications, including Vampires in Their Own Words: An Anthology of Vampire Voices (2007) and Walking the Twilight Path: A Gothic Book of the Dead (2008). Late last year she released her debut novel, Conspiracy of Angels, the first of the Novels of the Shadowside.

When Zachary Westland regains consciousness on the winter shores of Lake Erie, his memories are gone. All he has are chaotic visions of violence and death… and a business card for Club Heaven. There Zack finds the six-foot-six transexual decimus known as Saliriel, and begins to learn what has happened.

Alarming details emerge, of angelic tribes trapped on Earth and struggling in the wake of the Blood Wars. Anakim, Nephilim, Gibburim, and Rephaim — there has been an uneasy peace for centuries, but the truce is at an end.

With the help of his “sibling” Remiel and Lilianna, the lady of beasts, Zack must stem the bloodshed before it cannot be stopped. Yet if he dies again, it may be for the final time.

Conspiracy of Angels was published by Titan Books on October 27, 2015. It is 426 pages, priced at $7.99 for both the print and digital editions. The cover was designed by Julia Lloyd.