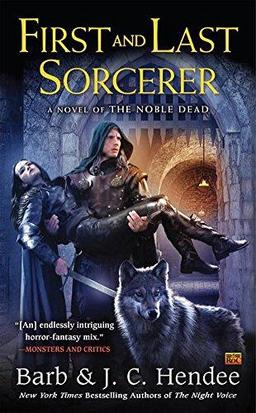 Barb and J.C. Hendee began The Noble Dead series with Dhampir way back in January 2003. Since then they’ve released a dozen additional books in the series, and the fourteenth and final volume, The Night Voice, is scheduled to arrive in hardcover on January 6th.

The same day, Roc will release the penultimate book, First and Last Sorcerer, in paperback for the first time. For those pragmatists who wait until an entire series is in print before they pick up the first volume, your day has finally come. Check out one of the most popular series on the market, which Publishers Weekly calls “A crowd-pleasing mix of intrigue, epic fantasy, and horror.”

Waylaid in their quest for the orb of the Air, Magiere, Leesil, Chap, and Wayfarer have all been wrongly imprisoned. But it is Magiere, the dhampir, who suffers the most at the hands of a cloaked interrogator employing telepathic torture.

Arriving at the Suman port city in search of Magiere, Wynn Hygeorht and her companions — including vampire Chane Andraso — seek out the Domin Ghassan il’Sänke for assistance, which proves no easy task. The domin is embroiled in a secret hunt for a spectral undead with the power to invade anyone living and take the body as its host.

Even if Wynn manages to free her friends from prison, battling this entirely new kind of hidden undead may be a challenge none of them can survive…

Another series I’ve fallen woefully behind in.

I’m behind in ALL my favorite series.